HE WAS THERE IN THE BEGINNING AND HE IS THERE NOW TO SEE THE FORESTS PROTECTED, COMMUNITIES INVOLVED AND MORE WILD RED PANDAS THAN EVER BEFORE.

At the young age of 13, Phinju Sherpa had to make a difficult choice; stay at home on his traditional family farm, or pursue a semi-nomadic herding life raising cows and goats. If he stayed, there was not enough food to feed his family, if he left, his family could survive. He made a hard decision, then ventured into the forest to become a livestock herder.

Now 36 years old, Phinju is best known for his exceptional red panda tracking skills in the Ilam district of Eastern Nepal. His job is to make sure the red panda habitats are protected and properly managed.

His transformation from a livestock herder to a red panda conservationist is inspiring. When Sherpa decided to take up herding, he had no money, so he managed other locals’ livestock herds. He often bartered his time herding in exchange for milk and cheese. He lived with the herds in temporary sheds set up in the forests. One day he was collecting firewood when he glimpsed Punde Kundo, (the name for ‘red panda’ in the local dialect). He had heard stories about Punde Kundo but didn’t know much about red pandas or their importance.

“I used to hear villagers blaming red panda for attacking their livestock but they didn’t retaliate by killing them. It must be because the majority of the villagers are Buddhists and they refrain from harming any living beings,” he said. But Sherpa adds, “Some locals kept guard dogs to protect their livestock against attacks by wild animals. The dogs sometimes killed red panda inside the forest,”.

Life was arduous as a herder, but then in 2001 a chance meeting with Brian Williams, an American scholar, changed both of their lives. Thanks to Pinju’s help, Brian would later found Red Panda Network.

Brian was later visiting Panchthar District to conduct field research on the red panda. He wanted to know everything - he was curious about the red panda’s appearance, its diet, and where it might be located. Locals recommended he speak with Phinju. The two met and Phinju mentioned he had seen red panda droppings in the forest. Brian asked Phinju to guide him to this area, but Phinju had other responsibilities and declined. Two days later, Phinju returned and was surprised to find Brian. “He was waiting for me to take him to see the red panda droppings inside the forest,” Sherpa said, “I then took him to Patashi to see the droppings. Brian took pictures and he returned back to Kathmandu.”

A year later, Phinju received a letter from Brian asking him to come and meet him in Ilam to help start a pilot research project on red pandas. Sherpa was hesitant as he had to look after his herds. Eventually, he agreed, sold his 80 heads of livestock and joined Brian on his quest to understand the elusive red panda. 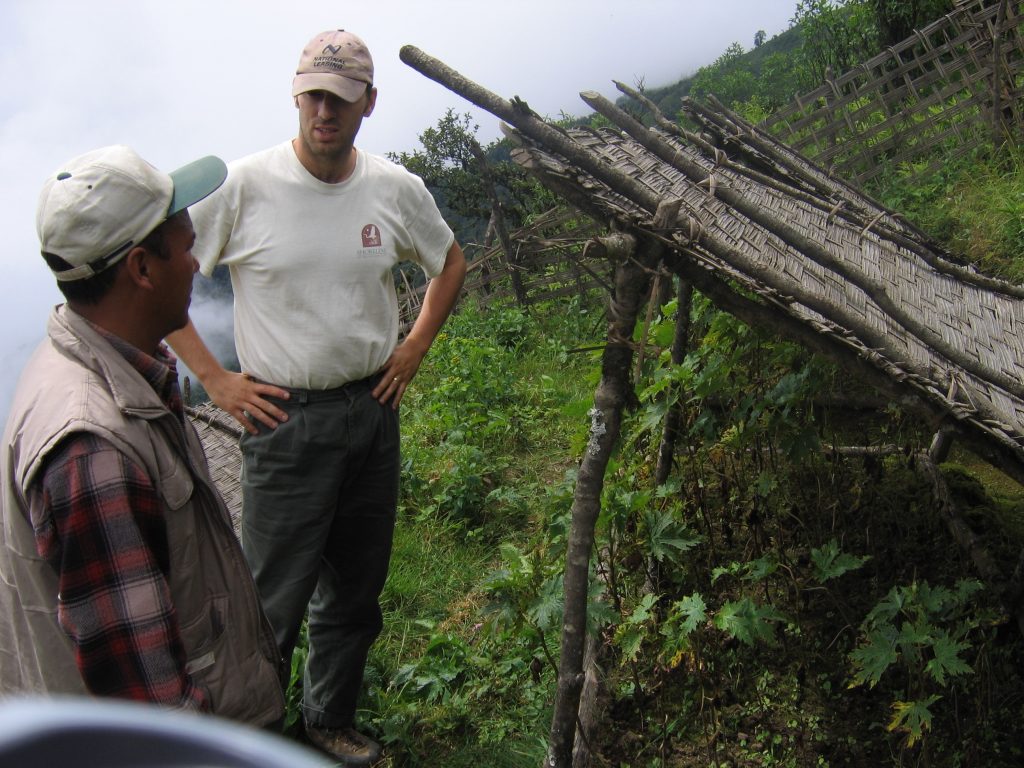 The two traversed through the mountain forests of Eastern Nepal for a full year (2002-2003) where they spoke with local communities, identified water sources, studied red panda food habits and surveyed habitat. This experience was very educational for both Phinju and Brian, and it helped to lay the foundation for RPN.

Sherpa has since been involved in red panda conservation activities: ranging from outreach, discouraging open grazing and deforestation, distribution of improved cooking stoves, tree plantation and habitat management to sustainable livelihood initiatives and tracking red pandas for ecotourists. He is now employed as a field technician with RPN where he regularly monitors red panda habitat, conducts surveys and assists with ecotrips.

Illegal hunting and poaching of Himalayan wildlife are not new developments in Sherpa’s community. He used to hear stories of the transport of red panda cubs from the forests in Nepal to bordering Indian markets. “Red pandas and their habitats were threatened even then, but locals including me weren’t aware that our actions were responsible for it,” he said. 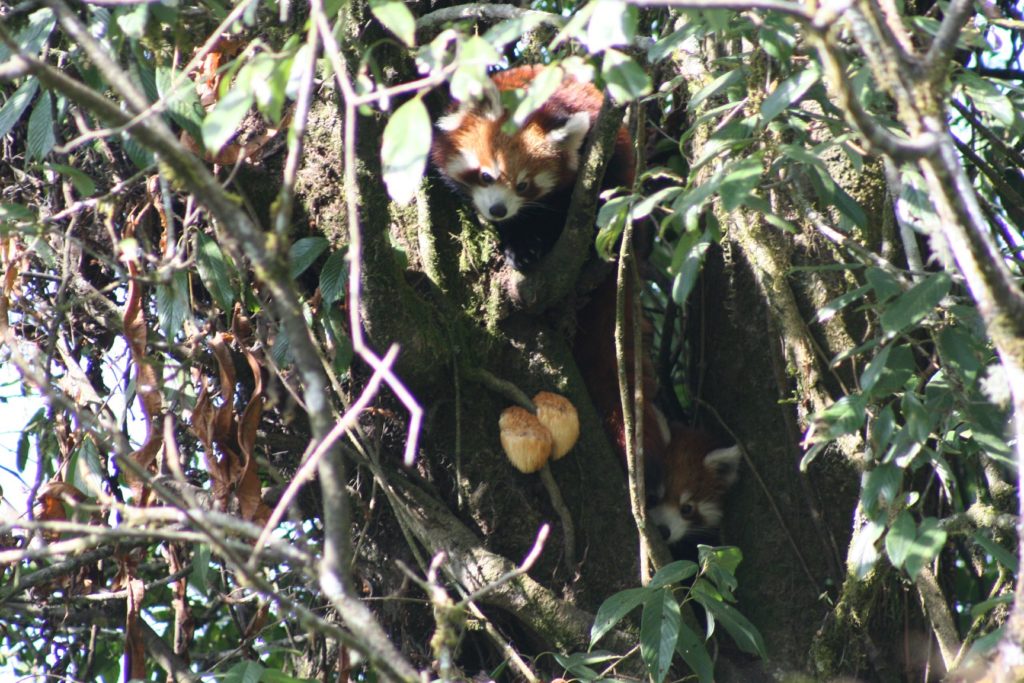 There were 8 red panda sightings during November 2018 Eco Zoo Trip including two sets of cubs; a rare sighting in the wild.

Actions such as open grazing in the forest which degrades habitat as livestock eat bamboo and directly compete with red pandas for food. 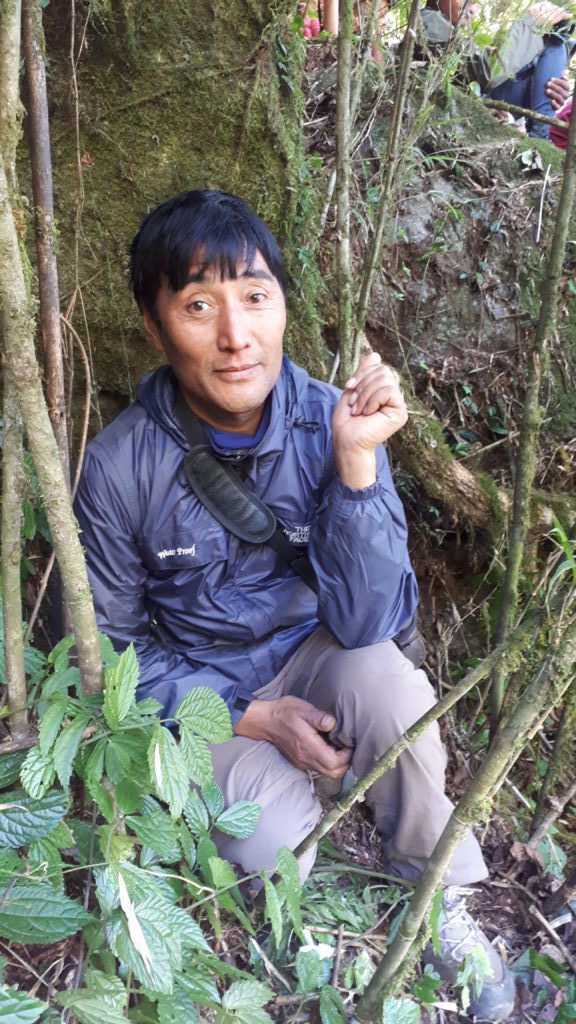 Thanks to Phinju’s efforts with villagers—who were reluctant to stop open-forest grazing are now committed to protecting this endangered species. This has resulted in increased red panda sightings which continues to attract ecotourists and support the local economy.

In the last week of November, participants of a 2018 Eco Zoo Trip—which included members from Kolmarden Wildlife Park, Detroit Zoo, SeaWorld San Antonio and Longleat Safari Park—were fortunate enough to experience a record of 8 red panda sightings in Ilam, Eastern Nepal. Phinju Sherpa was the head tracker for this trip. 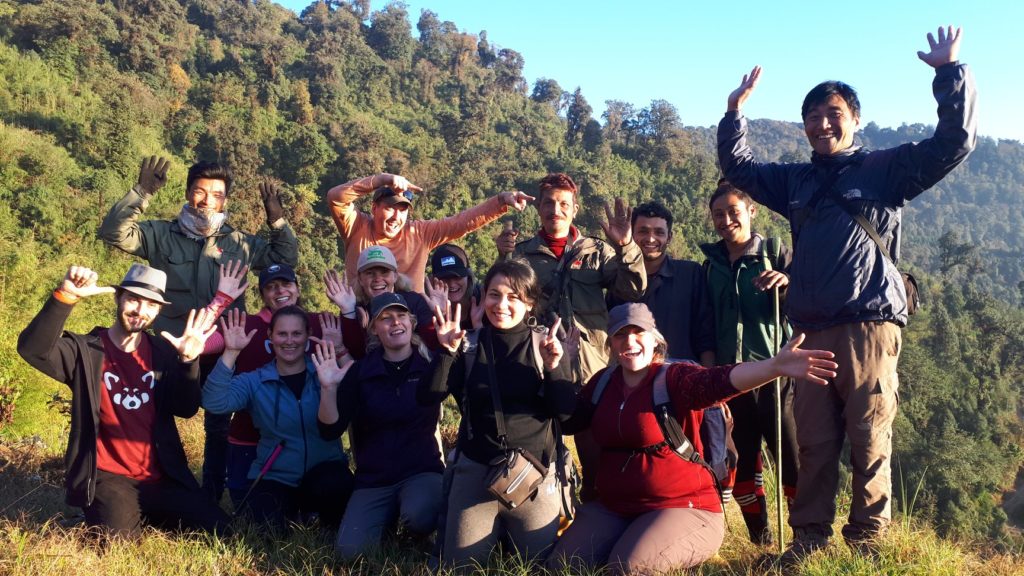 “It is good to see that more people are seeing red pandas in the wild. It is also important to ensure that red panda’s habitats remain undisturbed and protected,” Sherpa said.

It has not been easy to convince people to stop livestock grazing inside the forest. But, with the help of locals like Phinju, and other members of his community who a are working as RPN Forest Guardians, they are mitigating threats to red panda and seeing the rewards of preserving this species.