We're expanding our community-based red panda conservation programs to Bhutan and we have some encouraging updates to share!

In September 2019, Bhutan published its five-year red panda conservation plan. Red Panda Network (RPN) played a key role in advocating for and developing the plan, and also helping ensure its effective implementation under the leadership of Bhutan’s Ministry of Agriculture and Forests, Nepal’s Department of National Parks and Wildlife Conservation, and the Department of Forest and Soil Conservation. We’re excited to share the progress we’ve made thus far. 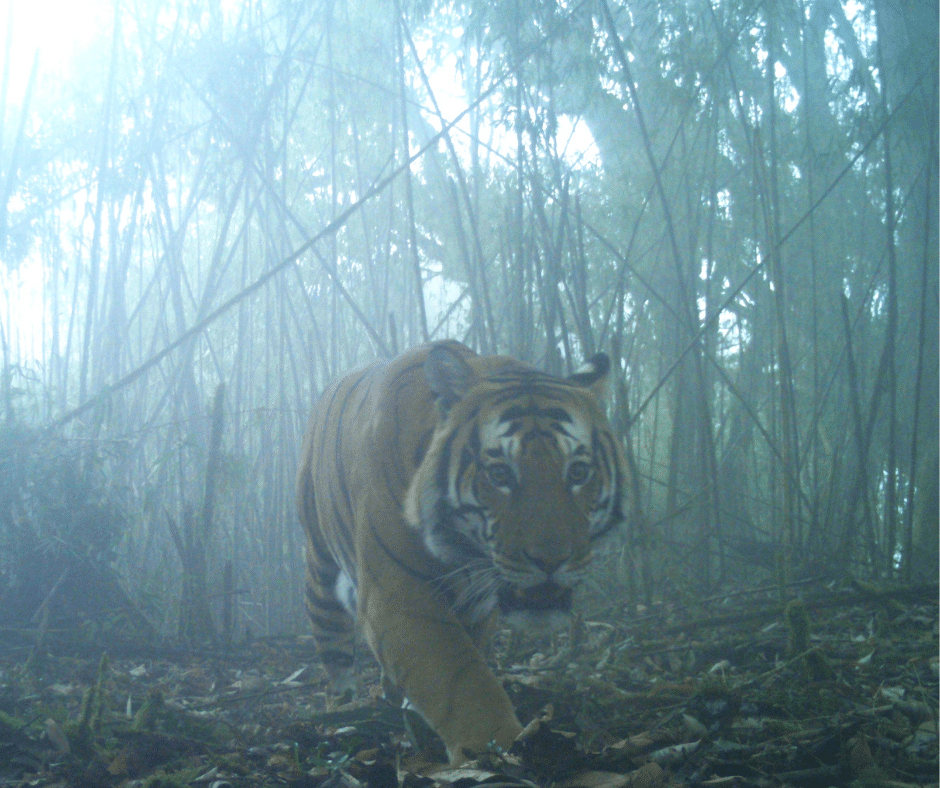 In order to accurately collect data to help develop red panda conservation strategies, we needed to ensure there were clear procedures and training to help familiarize the survey team and educate new team members.

RPN worked with a team of forestry officials with expertise in red panda conservation to develop the Red Panda Monitoring Protocol for Bhutan. The protocol covered training on survey design and methods, including both theory and practical sessions that gave participants hands-on experience in collecting data. A team of eight officials across four field divisions were trained as part of the “training of trainers” (ToT) program using the protocol. These officials then trained the survey team members within their divisions. 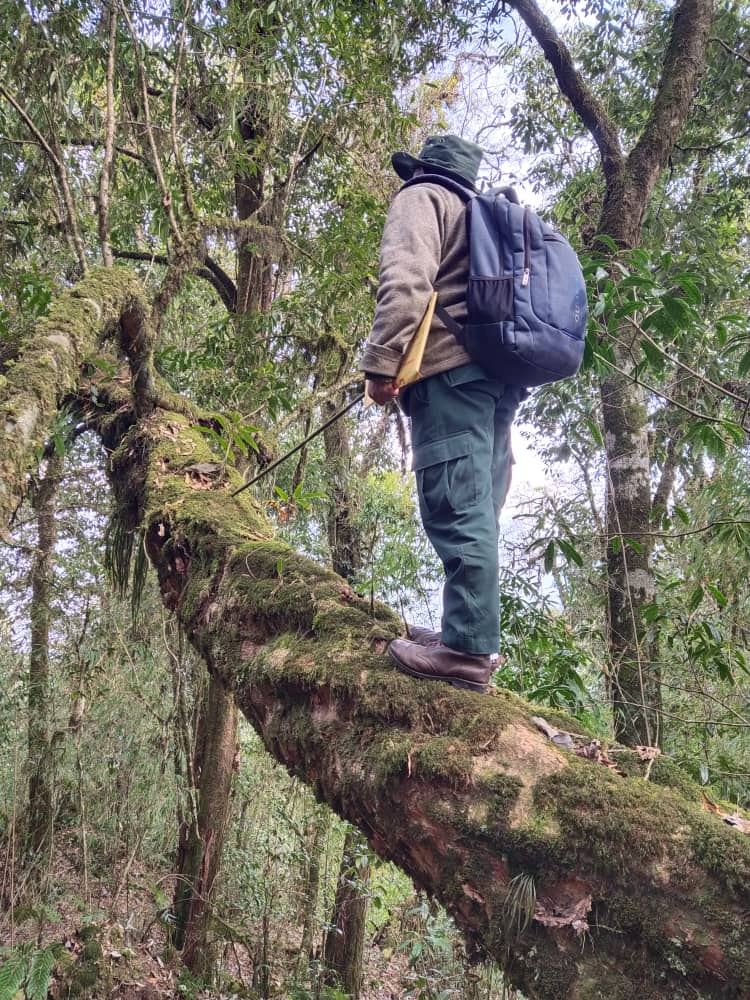 Objective 2. Develop an understanding of red panda habitat usage and the conservation threats they face in the southwest region of Bhutan

The team identified potential red panda habitats using forest type, altitude, and proximity to human settlements as parameters. They overlaid a 4x4 square kilometer biodiversity monitoring grid over the territory and identified 135 grids to survey. Half of these grids were surveyed for signs of red pandas and for vegetation sampling, the other half were selected for camera trapping.

During these surveys, the team also evaluated the vegetation structure and composition of the red panda habitats. Tree heights and diameters were measured and recorded to determine the basal area (or the average amount of an area occupied by tree stems, canopy cover, and forest density). Bamboo and shrubs were counted, and measured for height, while herb species were also recorded. In addition, the team collected other physical parameters such as aspect, elevation, slope, and distance to water source.

The survey teams recorded many direct sightings of red pandas, and also found evidence of red panda activity through droppings and tracks. 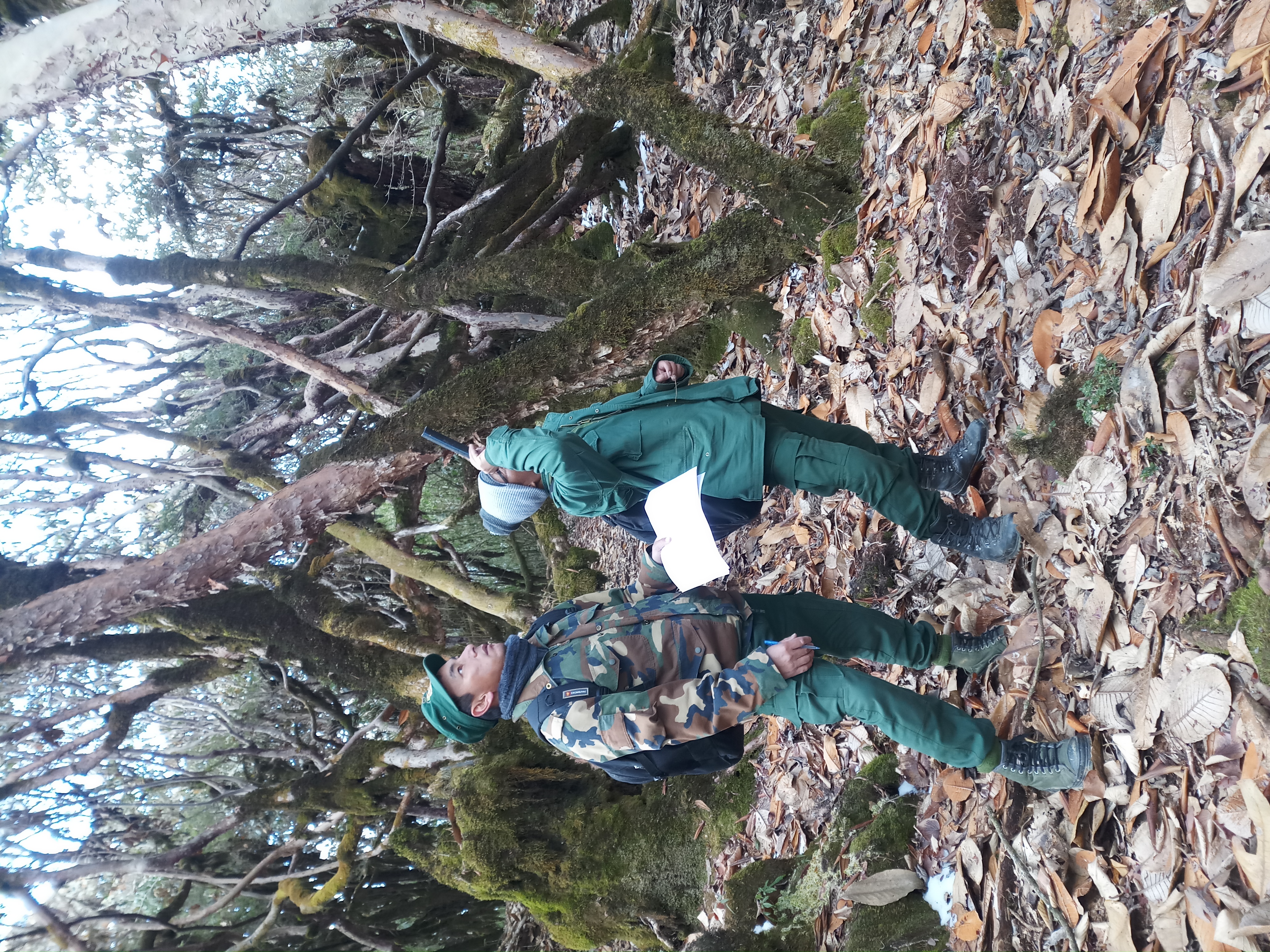 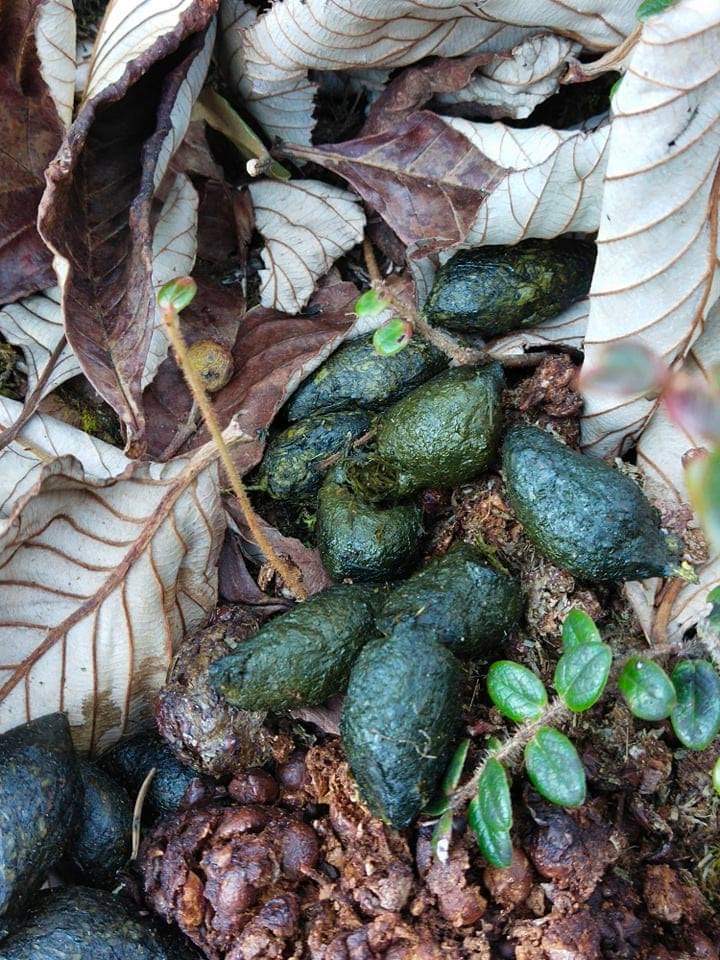 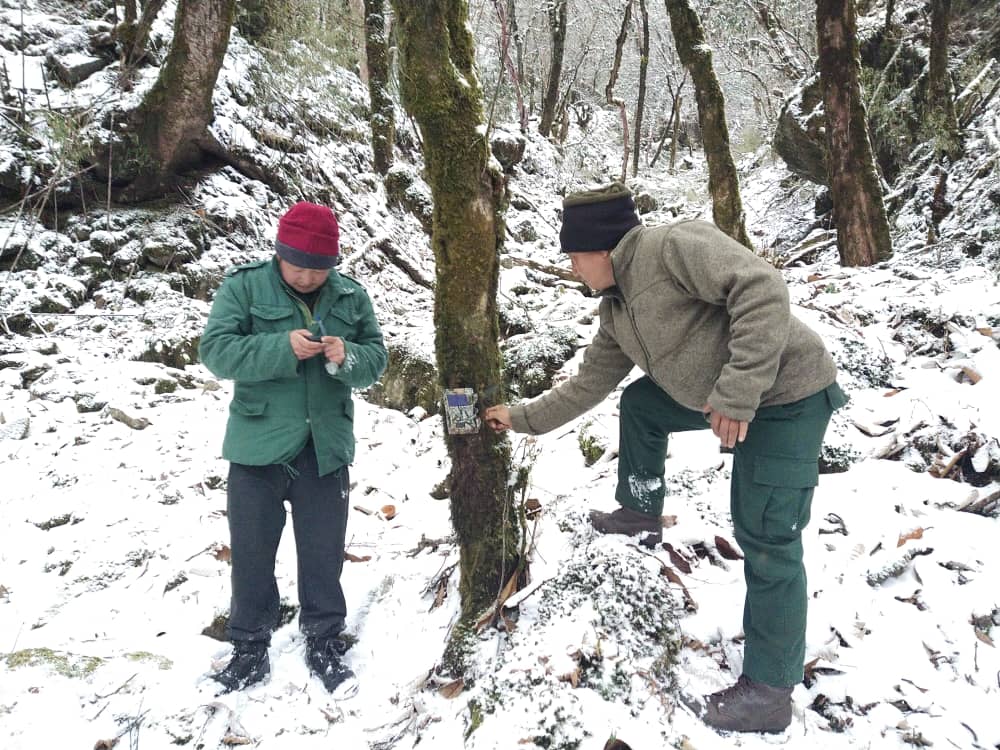 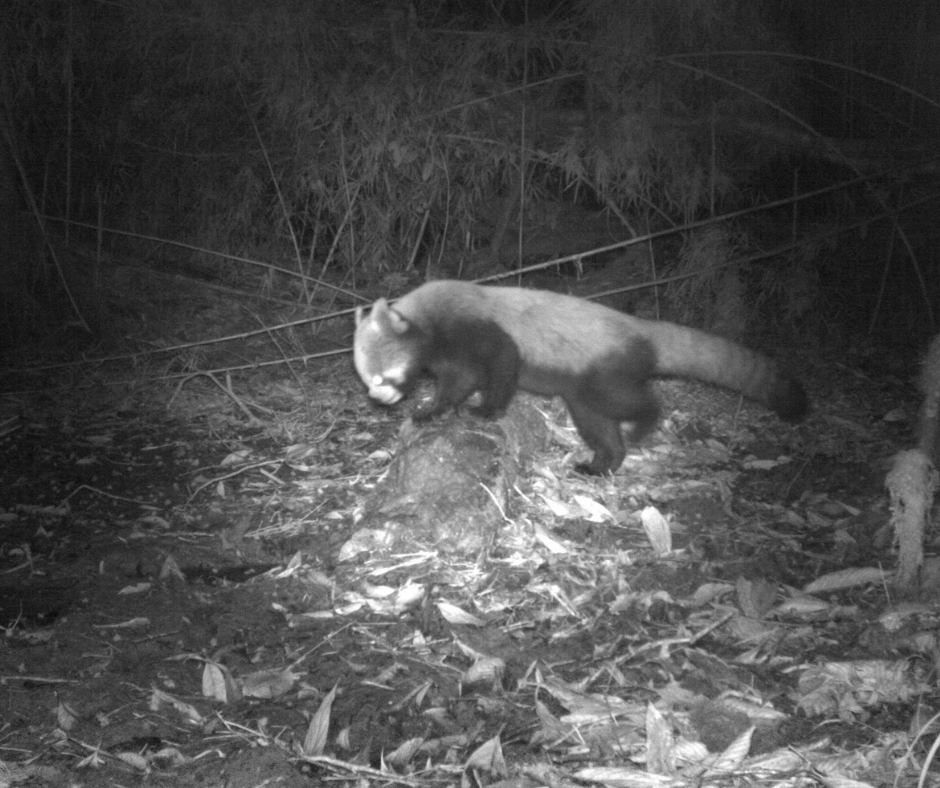 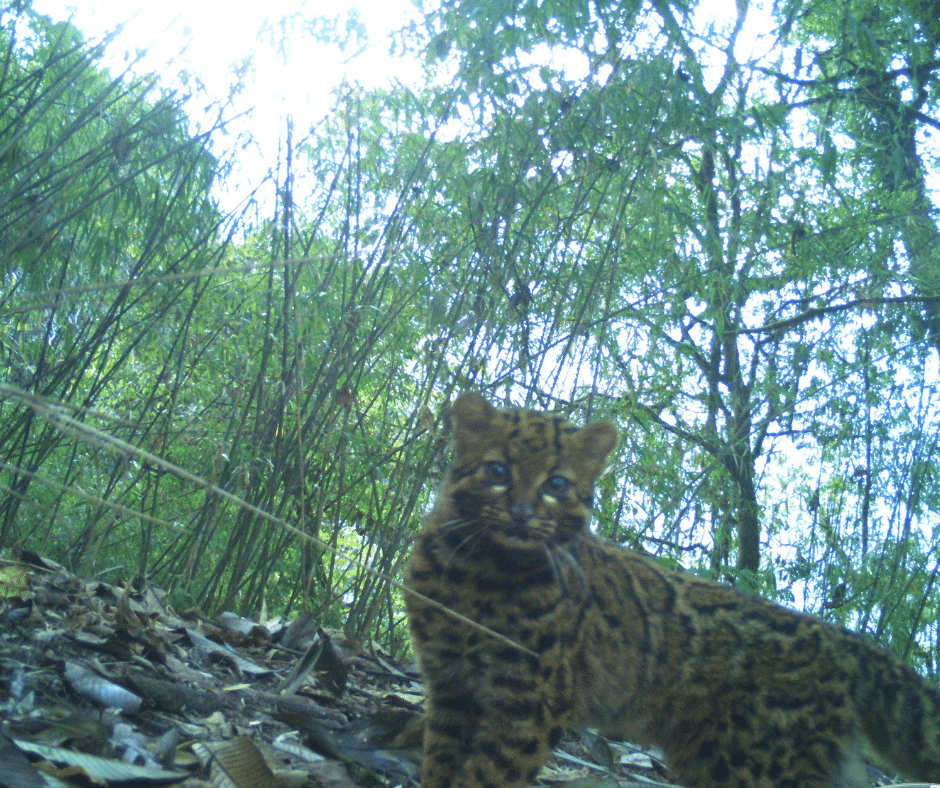 Over 50% of the surveyed plots had evidence of threats to red pandas. The most common threats were signs of livestock farming (observed in 37% of plots), non-timber forest product (NTFP) collection (17%), timber harvesting (13%), infrastructure (6%), and stray dogs (2%). One positive finding was the survey team did not record any signs of red pandas being hunted.

The team conducted a survey of 350 people across the four districts to understand perceptions on red panda conservation from communities residing in and around red panda habitats. A semi-structured questionnaire was used to collect information from local households, and qualitative insights were captured during focus group discussions. During the focus groups, the survey team informed participants about the need and importance of red panda conservation.

Based on these findings, the Bhutan teams are developing plans to conduct awareness campaigns and developing educational resources and materials to be used in schools. 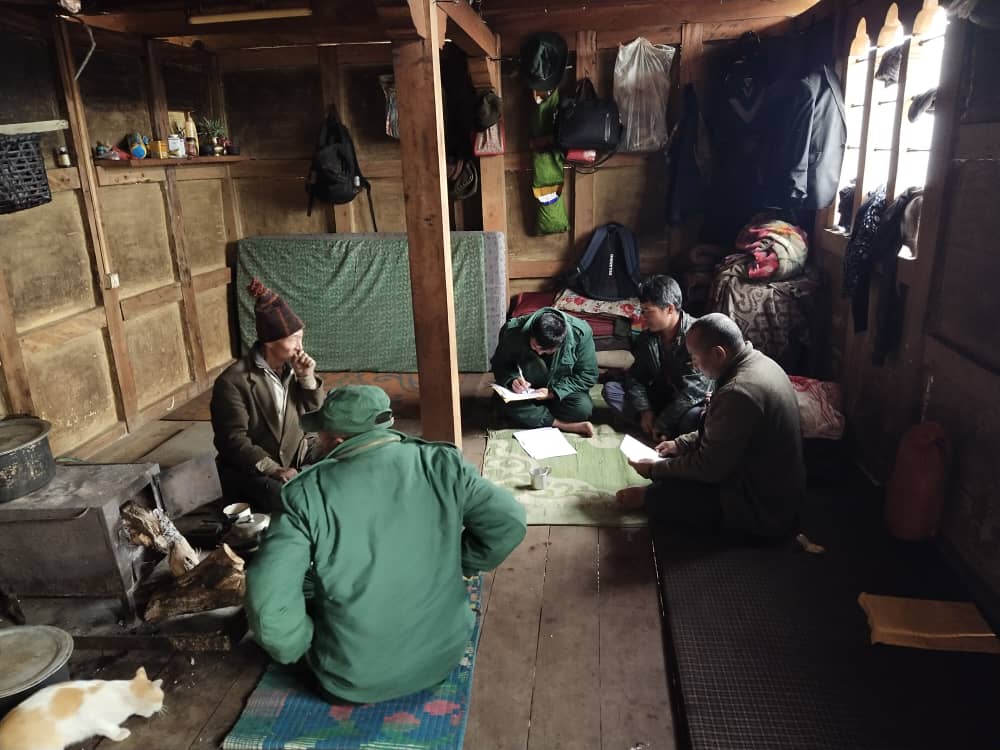 We are encouraged by our progress and share enthusiasm with our Bhutan partners. "The support and collaboration with Red panda Network has helped us expand red panda conservation in Bhutan and the research provided new insights on red panda habitat suitability and connectivity between different conservation landscapes. The work has also helped us take a bigger step toward red panda conservation by exploring the genetics of red panda in Bhutan," says Letro who is the Sr. Forestry Officer with the Nature Conservation Division of Bhutan's Department of Forests & Park Services.

RPN's Country Director in Nepal, Ang Phuri Sherpa, shares his optimism regarding our work in Bhutan: "As a part of red panda range countries initiatives, this a first step we have taken in Bhutan to help understand red panda's habitat preference, distribution and its conservation threats in south-western Bhutan bordering India. I am sure that the results of the study will be a stepping stone for formulating a transboundary red panda conservation action plan."

Download our report to review the study findings in more detail! Learn more about our work in Bhutan. 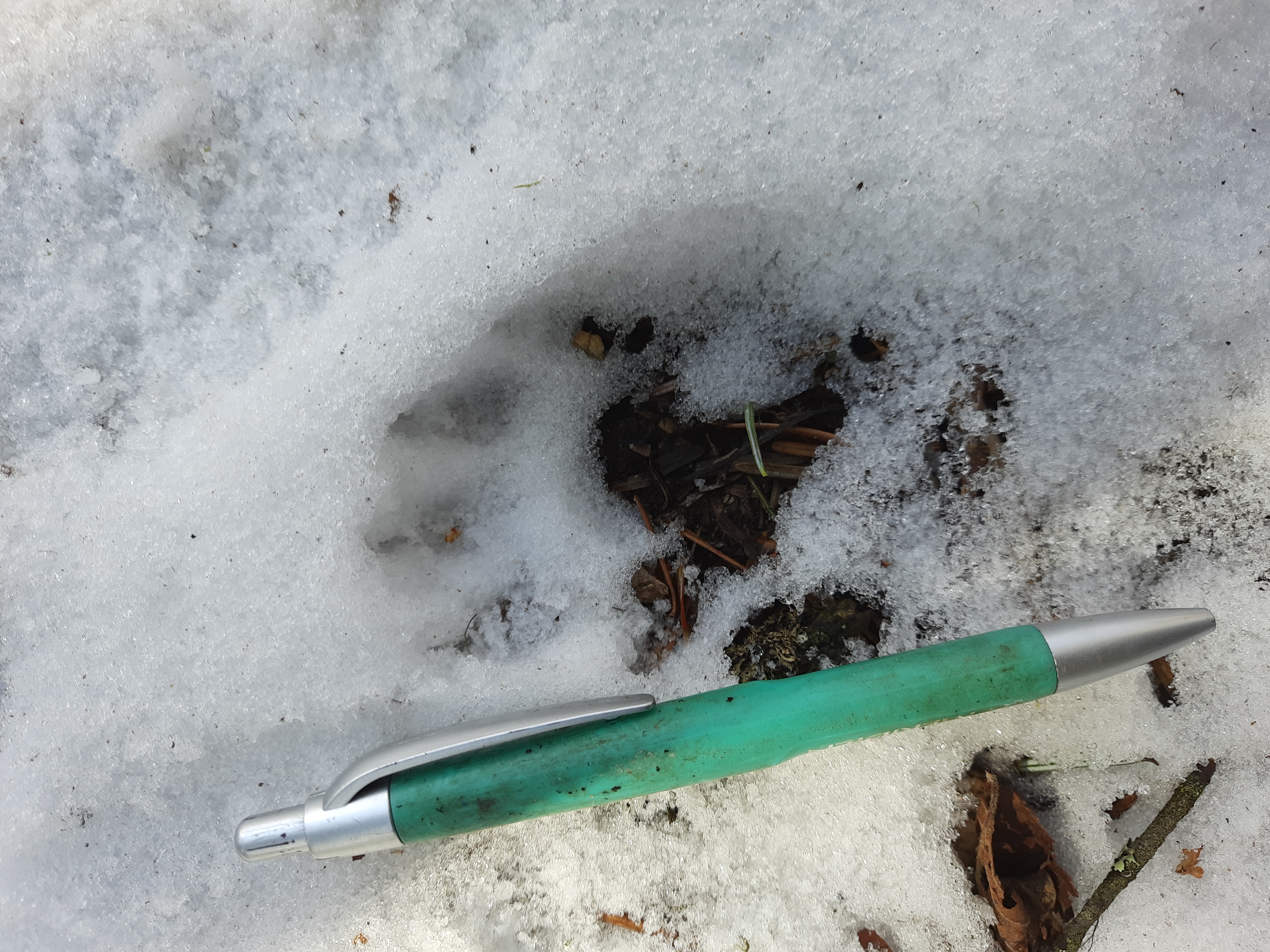