The red panda is an elusive and mysterious mammal of the biodiverse Himalayan forests. They have also been called the "firefox", “lesser panda”, and “red-cat-bear”— the red panda has many nicknames.

We prefer "first panda" and "original panda" as western scientists described it 50 years before the giant panda, and gave pandas their name.

The red panda had been previously classified in the families Procyonidae (raccoons) and Ursidae (bears), however recent research has placed it in its own family Ailuridae, in superfamily Musteloidea along with Mustelidae and Procyonidae.

Red pandas are endemic to the Himalayas in Nepal, India, Bhutan, Myanmar (Burma) and southern China. Red pandas inhabit the eastern Himalayan temperate broadleaved forest with bamboo in the understorey with an altitudinal range preference of 2400-3900 m

The Two Subspecies (or species)

Found in Nepal, northeastern India (West Bengal, Sikkim, western Arunachal Pradesh), Bhutan and southern Tibet.  This was the first red panda to be discovered and was officially named Ailurus (from the Greek word ailouros, which means cat), and fulgens (meaning fire-colored or shining) by French zoologist Frédéric Cuvier in 1825 who also said it was the most beautiful animal he had ever seen.

Found in eastern Arunachal Pradesh, Myanmar and parts of China (Yunnan, Szechuan and eastern Tibet). In 1902, Oldfield Thomas published a description of this different red panda that he named Ailurus fulgens styani, after F.W. Styan who had collected the specimen he was reviewing. Styan’s panda is a bit larger and usually more brightly colored than the Himalayan red panda.

Read this article for more information.

Red pandas are crepuscular, arboreal and solitary. They are most active in the early morning and late afternoon (crepuscular) spending most of the day resting in trees (arboreal) conserving their energy.

Red pandas are normally solitary creatures but come together in pairs in the breeding season. 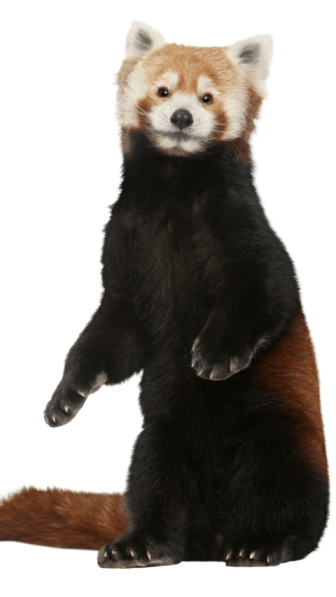 It might seem like an oxymoron, but the term ‘carnivore’, in this case, doesn't mean meat eater. Carnivore is actually a biological order that includes groups like bears, dogs, and cats, and while these animals are generally carnivores, some are omnivores, and some are vegetarians. Red pandas are classified as carnivores because they're descended from the same ancestors as other carnivores.

In fact, red pandas mainly eat bamboo leaves, and they eat a lot of it! This is because red pandas can digest only about 24 percent of the bamboo they eat. That means they need to eat 20 to 30 percent of their body weight each day—about 2 to 4 pounds (1 to 2 kilograms) of bamboo shoots and leaves. They also eat grass and fruit and occasionally an egg, insect or small animal or bird.

Like giant pandas, red pandas have a pseudo-thumb: an enlarged, modified wrist bone they use for grabbing bamboo stems and tree branches. It was once thought that it must be an adaptation to eating bamboo, but the red panda's more carnivorous ancestors had this feature as well. According to a 2006 study, what happened was "one of the most dramatic cases of convergence among vertebrates."

Convergent evolution is when two unrelated animals faced with similar circumstances evolve to look similar. In this case, the red panda's false thumb evolved to help it climb trees, and only later became adapted for the bamboo diet, while giant pandas evolved this virtually identical feature because of their bamboo diet.

Red pandas are built for life in the trees. They have long, bushy tails that help them maintain balance and stay safe while traversing the canopy. Red pandas do not have paw pads and instead have fur covering the soles of their feet, which is believed to add extra insulation from the cold and help grip onto slippery, mossy branches. The soles of their feet also have scent glands to mark their territory. Their claws are sharp and can be pulled back like a cat.

Their ankles are extremely flexible, and the fibula and tibia are attached in such a way as to allow the fibula to rotate about its axis.  This means that red pandas are one of the few animals on the planet that can climb straight down a tree, head-first.

After three months growing in their mother, cubs are born into a nest made of twigs and grass in the late spring and early summer. Newborn cubs are covered in thick gray fur and their eyes and ears are closed. Cubs usually come in twos, but a litter can be anywhere from one to four siblings.The cubs will emerge from the nest at about three months of age but stay with their mother until the next breeding season starts.

They are considered full-grown between 18 and 24 months and live on average 8 to 10 years in the wild; up to 15 years in zoos. Red pandas may live as long as 23 years. They show symptoms of age at around 12 to 14 years old and while females do not breed after age 12, males continue to be reproductively capable.

When it gets really cold red pandas go into what is called “torpor.” Almost half of their entire length is in their tail, and they wrap this fluffy appendage around themselves and go into a deep sleep, reducing their metabolic demands and lowering both their core temperature and respiration rate.

Red Pandas red and black color camouflages them from their predators. The red on their backs is exactly the same color as moss found on the trees where they live. The black on their stomach makes it difficult to see them from below.

It’s Not Just a Cute Face

The markings on a red panda's face help them survive! The reddish 'tear tracks' extending from their eyes to the corner of their mouth may help keep the sun out of their eyes. The white on their face is "almost luminescent" and can guide a mother's lost cubs in the darkness!

Red pandas often communicate when they feel provoked or threatened. They use body language  — such as head bobbing, tail arching and standing on their hind legs — and a variety of loud noises including the “huff-quack” and a warning whistle.

So if you ever see a standing panda you may want to keep your distance. The animal is likely feeling stressed and may resort to using their sharp claws or releasing a foul smell from their scent glands on the intruder. 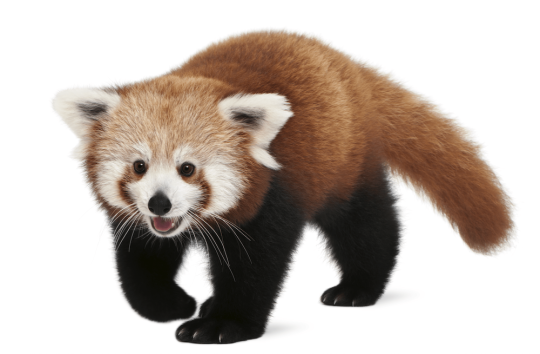 15 Fantastic Facts About Red Pandas
12 Ways Red Pandas Are Unique (and Cute!)
Red Pandas Love the Snow and Are Well Adapted To It

RPN's red panda infosheet will get you started on becoming a red panda expert.