“Winging” It for Red Pandas

JASON'S PASSION FOR RED PANDAS IS BOUNDLESS AS HE TAKES TO THE SKIES TO SAVE THEM.

Like many Red Panda Network (RPN) supporters, Jason Phelan has a fondness for red pandas.

Their cuteness and vulnerability led him to first adopt one more than 20 years ago at Dudley Zoological Gardens in the West Midlands, England, and he has continued to adopt over the years at various zoos throughout the United Kingdom. Now based in Ireland, Phelan participates in Dublin Zoo’s animal adoption program.

In June, he created the Facebook page @ailurusfulgensredpanda to use his photography to raise awareness of the species’ endangered status.

But next summer in Ireland, Phelan will take his red panda devotion to even greater heights—literally.

That’s when he will be strapped to the top wing of a 1940s-era Boeing Stearman biplane traveling at more than 130 km/hr to raise money for RPN.

The wing walk will be the culmination of several events Phelan has planned for 2020, including a red panda meet-and-greet at a UK zoo in March, and a fundraiser featuring live music and prizes in April.

Thanks to the sponsorship of Millennium Promotions Ltd. and Executive Helicopters, all money raised will go directly to RPN. AeroSuperBatics Ltd. will provide the pilot and the plane. 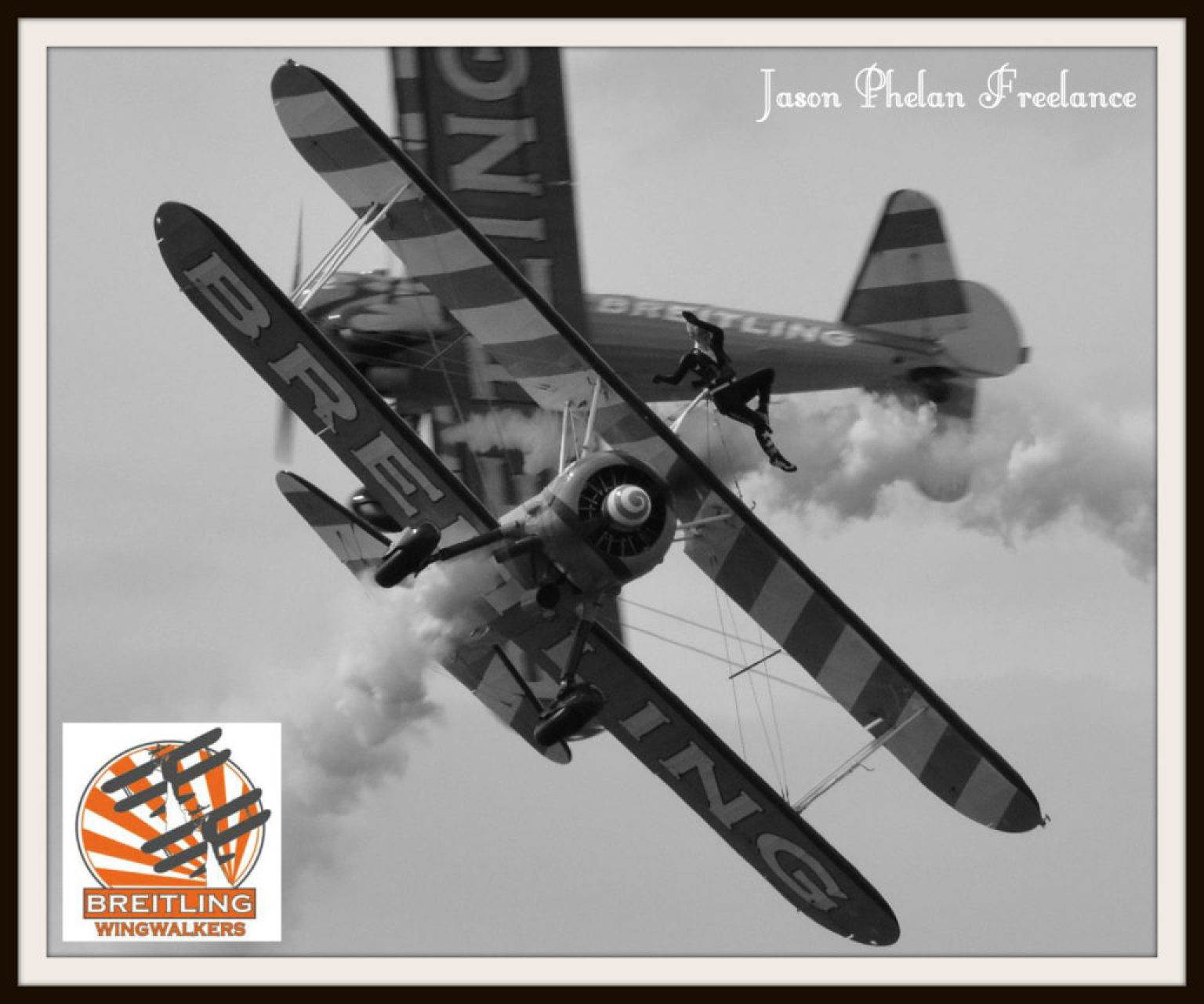 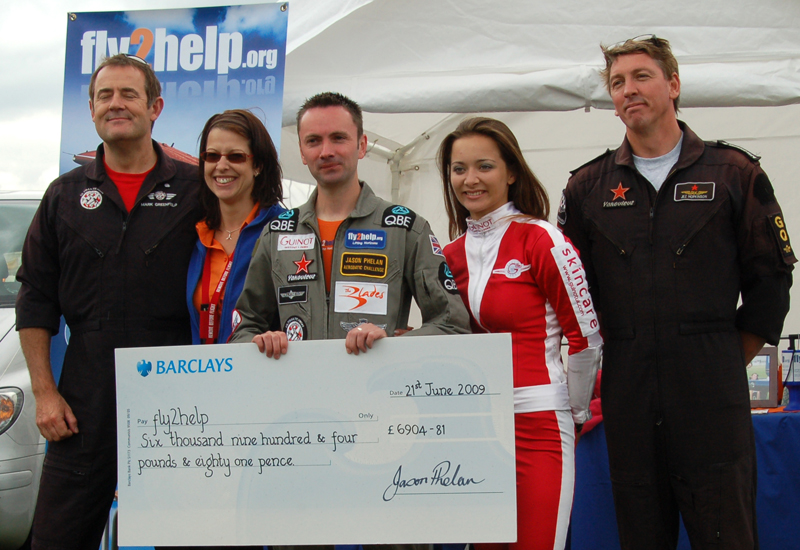 “With this one, I wanted to create quite a buzz,” Phelan said in a phone interview from his office in Dublin. A GoPro camera attached to the plane will capture the hair-raising adventure. “This is a moment I want to remember when I’m 70 or 80,” he said.

In the early 20th century, the first wing walkers created their own sensation, performing such death-defying stunts as playing tennis on the wing of a plane mid-flight and walking from the wing of one plane to the wing of another while both aircraft were in the air.

Phelan, who said he’s no daredevil, won’t do anything quite that dramatic, and he won’t actually walk on the wings. Instead, he will stay securely in place during the approximately 20-minute flight that will include stomach-churning aerobatics, such as loop-the-loops and barrel rolls.

As a freelance air show photojournalist, and an aviation professional and enthusiast, Phelan is a fixture at air shows in the UK and Ireland, and he said one of the biggest attractions is the wing walking formation team.

So wing walking for charity was a no-brainer. “If I just approached the media, I don’t think I would get the same reaction I am now,” he said. “The publicity it’s going to generate is exactly what I am going for.”

Although his Facebook page has, to date, more than 1,300 followers, Phelan said it’s not enough to attract the audience he wants to reach, which includes people who don’t know much about red pandas. “It’s the fact that I used to talk about them, and people said, ‘Red pandas, what are they?’“ 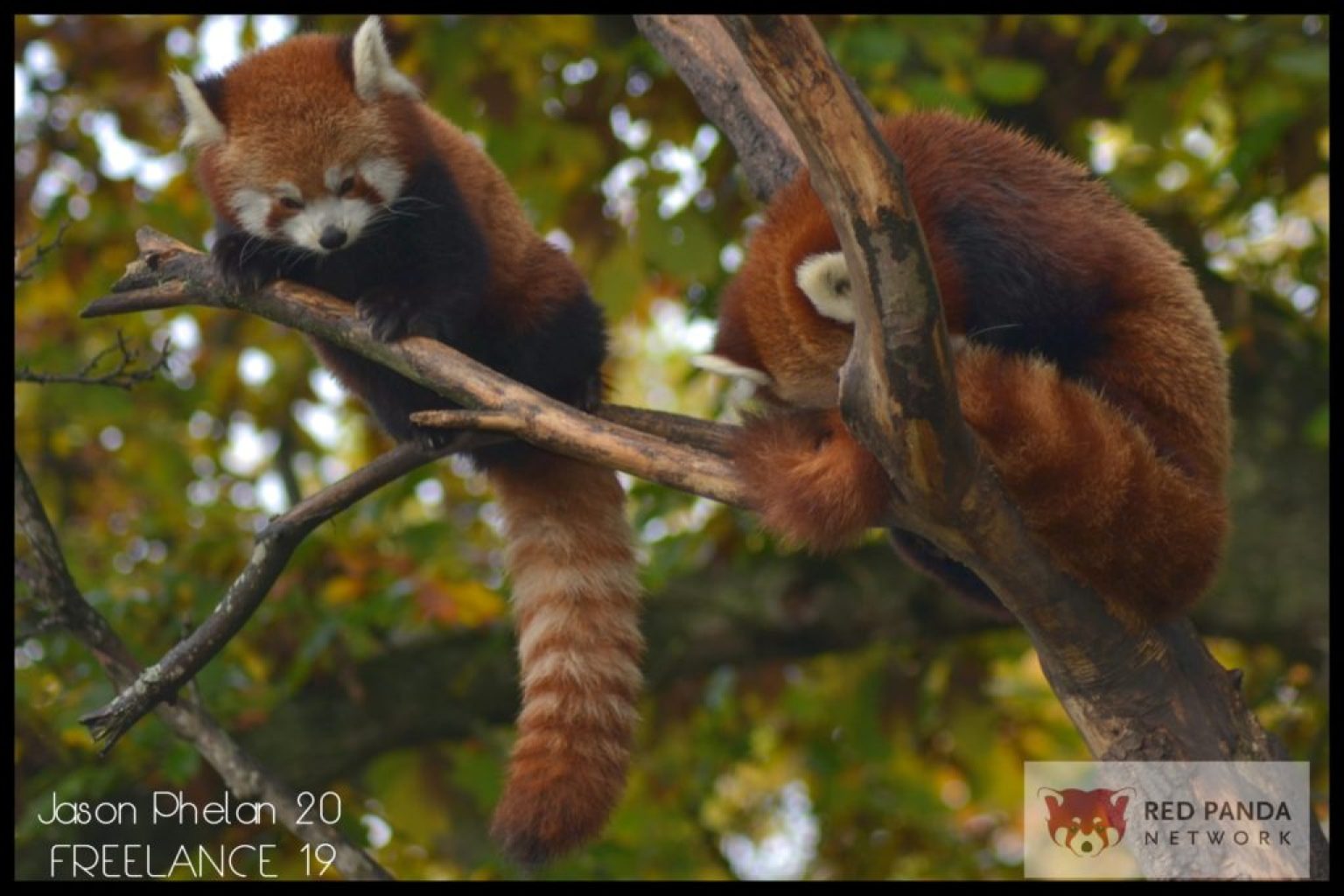 Despite being voted Ireland’s favorite zoo animal in at least one poll Dublin Zoo conducted, red pandas still seem to be an obscure animal, Phelan said. “There’s obviously not enough information out there related to the red panda.”

But once people know about them, they remember them, he said. Phelan was a frequent visitor to Dublin Zoo this year, which gave him ample opportunity to observe people’s reactions to red pandas. “Everyone always says one word: cute.”

The only thing that rivals Phelan’s love for red pandas is his fervor for flight. “I caught the aviation bug at a very early age,” he said. His parents took him to his first air show when he was only 18 months old, and he attended the Biggin Hill airfield show for 34 years straight.

Now 47, Phelan is an administration supervisor in flight operations for the Irish Aviation Authority. Through the contacts he’s made at work, he’s had the chance to fly in a variety of aircraft, including a 1930s Tiger Moth, an aerobatic EXTRA 300 and a 1940s Harvard/Texan.

After crossing paths with members of the AeroSuperBatics team, Phelan made his first wing walk, “a straight and level flight” in 2007. Two years later, he completed a three-day aerobatic challenge, with pilots flying him across 11 counties from seven airfields in England, and raised nearly £7,000 (about $9,000) for the UK aviation charity fly2help. By the end of the challenge, which took a year of planning, Phelan had completed 370 aerobatic maneuvers. And not one sick bag was used.

To prepare for next summer’s wing walk, Phelan mostly is just walking. He makes the 9-km round-trip journey to work five days a week, weather permitting. “I think it’s just a case of mental preparedness and making sure my body is ready for the g-force strains and stresses,” he said.

After the adrenaline rush from his 2007 wing walk wore off, Phelan could feel wear and tear in his arms and legs, almost as if he’d run a marathon. The pulling of positive and negative g-forces places massive pressure on the body, and it’s difficult to breathe, he said. “There is a saying, ‘You can tell when a wing walker has had a good flight ’cause when they smile, you can see flies on their teeth.’" 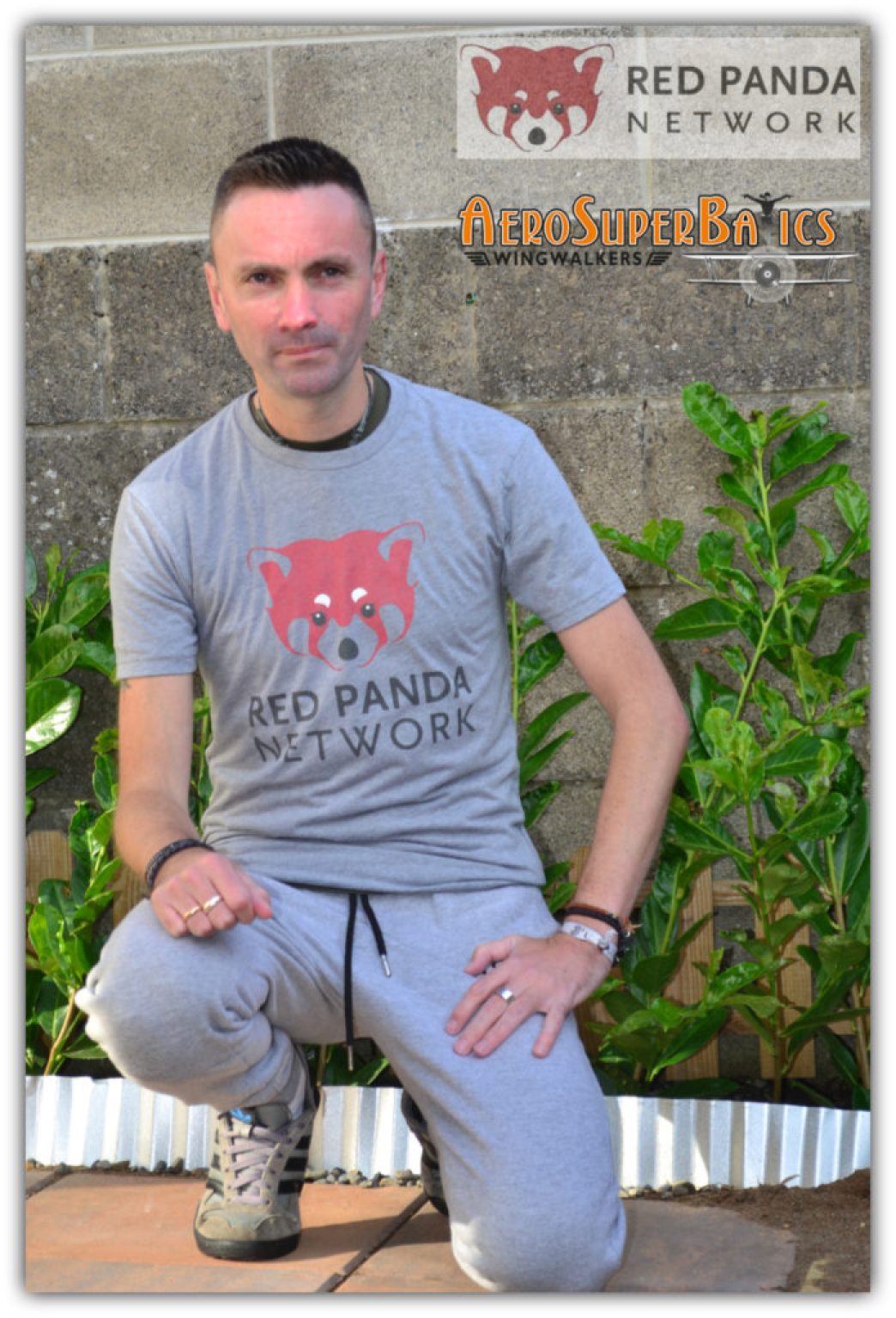 Aside from keeping him physically fit for the flight, Phelan’s walks are among several behavioral changes he’s making to offset the carbon footprint of the event. His other efforts include: making a personal donation to plant trees in Ireland and the UK; spending one minute less in the shower to reduce water consumption; and decreasing his use of the clothes dryer by hanging his wash on the line.

When Phelan arrives on the airfield next summer, his training will consist of a safety talk and a flight plan discussion. That’s it.

He has no pre-flight jitters because he knows and trusts the AeroSuperBatics pilots. “I know they know what they’re doing, and I wouldn’t risk doing anything that would jeopardize my life.”

His parents, who, along with his three-year-old nephew, will be among the spectators, also are optimistic about the upcoming flight, Phelan said. “They’ve been surrounded by aviation, and they know my passion for aviation.” 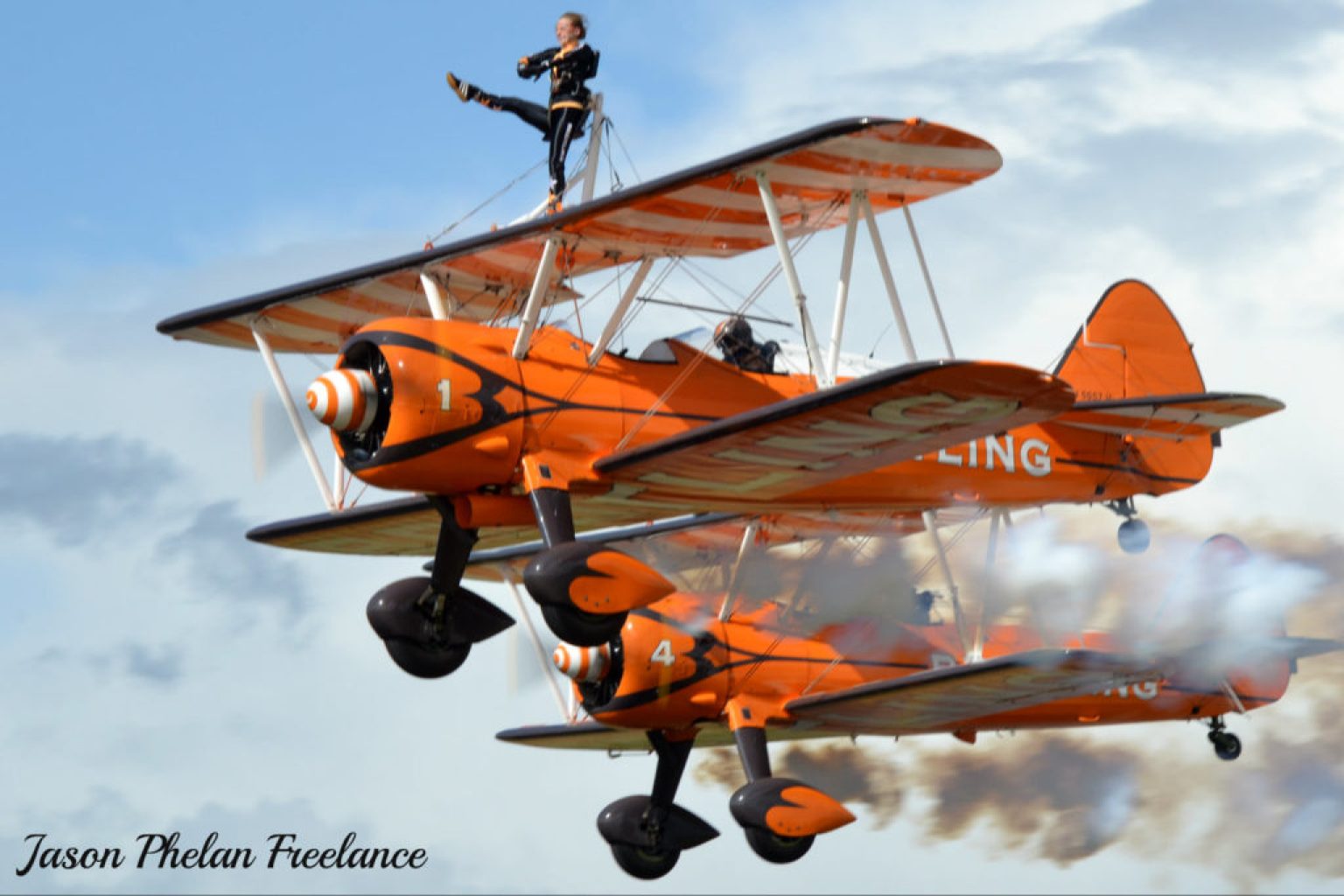 While Phelan and his parents are confident in what he’s about to do, his colleagues are less assured. Some think he is “stone mad,” Phelan said. “So even people in the aviation industry are like, ‘No, you wouldn’t get me doing that.’”

And even Phelan has his limits.

An early interest in becoming a pilot ended at 18 following discussions with the Royal Air Force and the viewing of a training video. Phelan also has no interest in skydiving. “I trust an aircraft to take me up and take me down, so why would I jump out of a plane that’s going to land 10 minutes later?”

To see Phelan’s red panda photography or to learn more about his aerobatic wing walking flight for RPN, visit his Facebook pages, @ailurusfulgensredpanda and @awfs2020, respectively. If you’re interested in donating, visit his JustGiving page.