Three zookeepers from Shepreth Wildlife Park in the UK, tackled three peaks in 24 hours to raise funds for the conservation of red pandas in Nepal. The UK’s National Three Peaks Challenge entails climbing the three highest peaks in England, Wales and Scotland, within 24 hours. The keepers met their goal and raised over $US 2K in the process! The climb is over but the fundraiser is still going. Please visit www.justgiving.com/climb4pandas if you would like to contribute. The fundraiser will accept donations until August 30,2015.

And be sure to read this account of the three climbs, as told by Alex Perry, Red Panda Keeper and Head of the West Section at Shepreth Wildlife Park…

Our little team is lucky enough to work with red pandas at Shepreth Wildlife Park in Cambridgeshire, UK. It is impossible to work with these amazing animals, and not realise that a world without them would truly be a poorer one. Since two red pandas, Ember and Sundara, arrived with us in September 2014, we have been doing daily keeper talks trying to raise donations and awareness for their plight in the wild. But in March this year, we decided that simply wasn’t enough. We wanted to do more!

And so Jen Simonson, Adam Button and I decided to take on the National Three Peaks challenge to raise money for Red Panda Network. This challenge involved climbing the highest peaks in Scotland, England and Wales respectively within 24 hours of starting the first mountain. Over the next few months we prepared for our little mission, with excursions to some of the peaks to familiarise ourselves with what we would face, and each of us did what we could to raise our fitness level to give us the best possible chance of meeting our 24-hour deadline.

After finishing our shifts on Sunday the 19th of July, we set off for Scotland, where we would start our challenge the following afternoon with the tallest peak in the UK, Ben Nevis. We set off from the base of Ben Nevis at 16.10 on Monday the 20th of July. Within the first 20 minutes, we got our first reality check, as we had to stop while another climber was airlifted off the path in front of us. It served as a reminder that these mountains are still a little wild themselves.

As we climbed, the weather got progressively worse (it is the UK after all!), so by the time we reached the snowy peak at 19.00, we were thoroughly soaked through. As time was of the essence and with the thought of dry clothes spurring us on, we turned on our heels and headed back down the mountain, reaching our car by 21.00. Our bedraggled state cost us some time though, as we had to change into dry clothes before setting off for Scafell Pike.

Driving through the night, we reached the car park at the bottom of Scafell Pike at 03.55. We set off in the dark by the light of our head torches, and as we climbed, dawn broke. With tired legs, our pace was somewhat slower than it had been on Ben Nevis, something we would have to make up for on our final mountain. As things were, we didn’t get back down again until 8 o’clock in the morning, slightly later than we had hoped for… 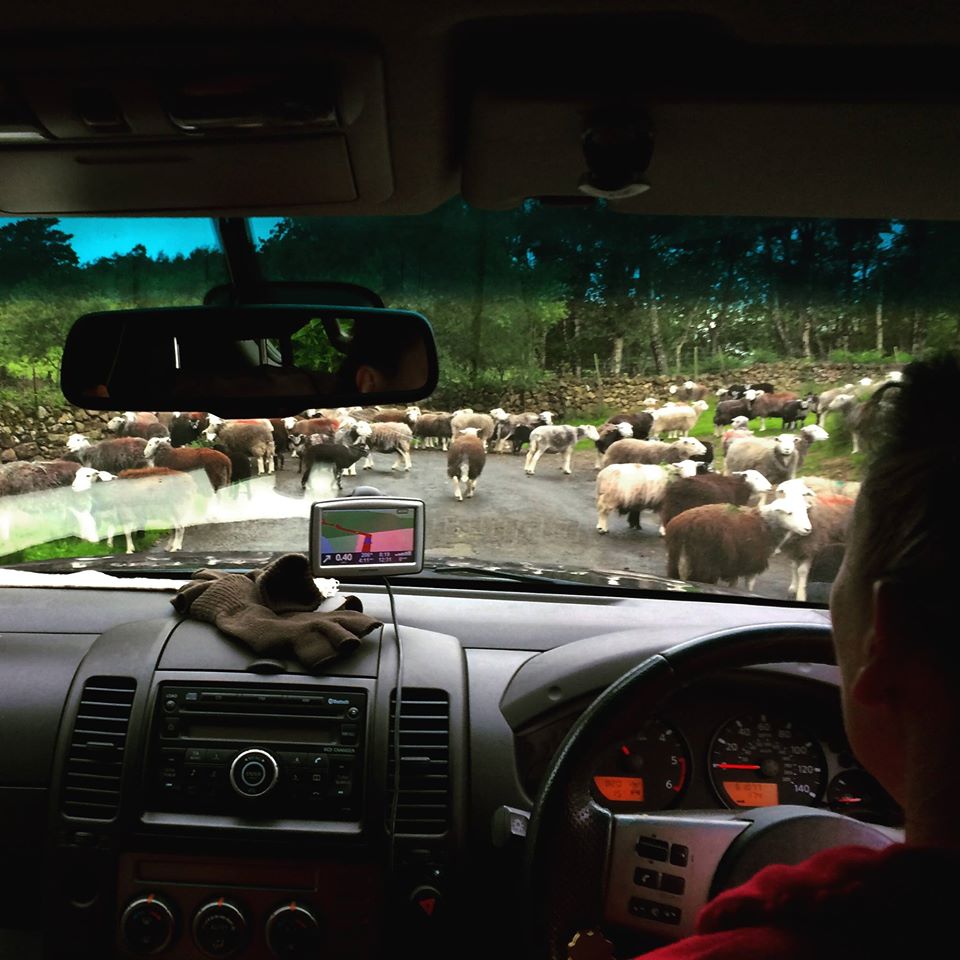 As we set off for Snowdon, our 3rd and final mountain, we hit a Cumbrian traffic jam – sheep were blocking the road! Though that alone didn’t set us back too much, we were now playing catch-up. It’s worth noting that successfully completing the National 3 Peaks Challenge is as much down to the person doing the driving as it is to the people climbing. In the months leading up to our challenge, our original driver sadly had to pull out, but a few weeks before the challenge, Tracey Button (Adam’s mum) very kindly agreed to join Team Panda! Over the course of this challenge, she would drive us 468 miles between the mountains, only resting while we were up the mountains (over 1200 miles if you count the driving on either side of the 24-hour period). It was the fantastic job that Tracey did on the driving that got us to the Pen-Y-Pass carpark at the base of Snowdon in Wales by 12.10 on Tuesday the 21st of July. If we wanted to make our deadline we would need to complete Snowdon in three hours and 50 minutes. Time to start power walking! 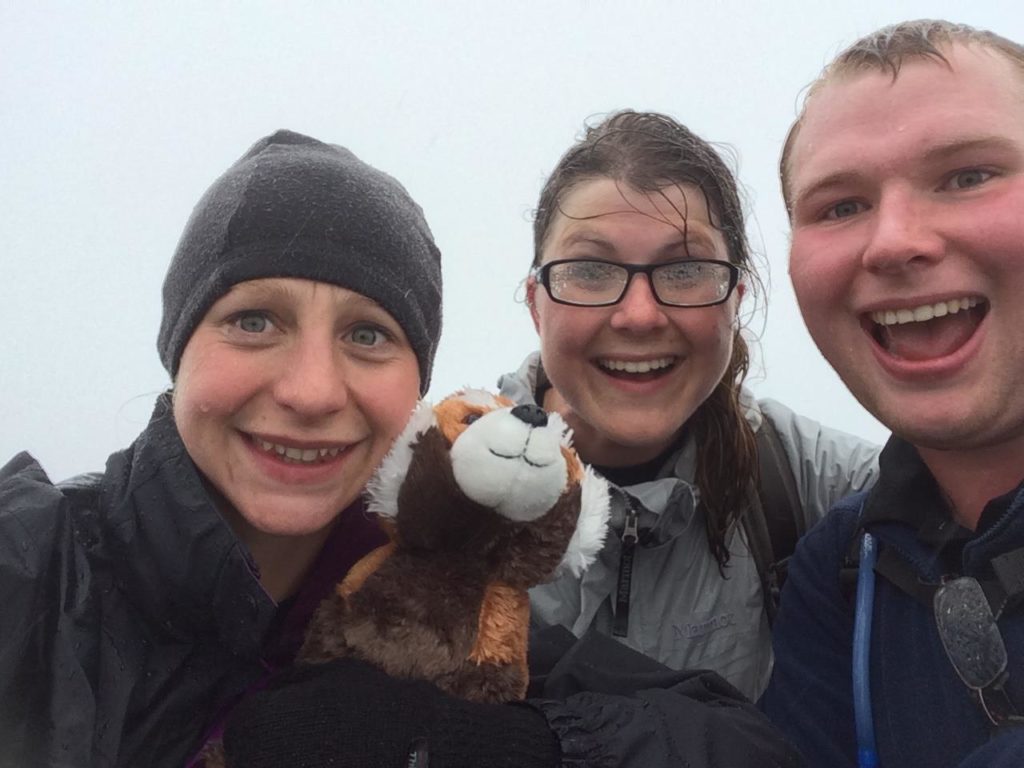 Though initially the Miners’ Track leading up Snowdon is nice and flat, it soon changes to a very steep ascent. Never had the mountain railway which so many tourists use to reach the summit seemed more appealing. The biggest challenges we faced climbing Snowdon were high winds and relatively poor visibility. The peak itself was so windy you had to crawl up the final staircase to avoid being blown off. This is where we took our final team “peak” shot of Jen, Adam, “Chipper” – our Red Panda mascot, and myself. Courtesy of the cloudy conditions, it looked exactly like the two previous “peak pictures” – clouds, clouds and more clouds!

With our deadline drawing near, we set off back down the mountain. Though we knew at this point we were cutting it fine in terms of making our deadline, the damp and windy conditions prevented us from rushing down the mountain for fear of slipping. Also some of the members of Team Panda were suffering a little from old knee and ankle injuries by this point, which limited our pace somewhat on the way back down. With the end in sight, we power walked and jogged our way along the final, flatter stretch. We reached the car park at 16.20 – 24 hours and 10 minutes after we set off at the base of Ben Nevis 2 countries ago, narrowly missing our target by 10 minutes. Though perhaps we are allowed to round down to the nearest hour?

Things we learned on this challenge: Firstly, when you meet fellow climbers on the hills and they say it’s only 5, 10, 15 minutes till the top – they’re lying! Secondly, Pepparamis, energy bars and glucose tablets do not a balanced diet make.

The challenge was a great adventure with some fantastic friends. Over the space of 24 hours we ascended 2957m, walked 22.3 miles, and traveled 468 miles by car (not including the journey up to Scotland or back to Shepreth, so a massive “Thank you!” to driver, Tracey!).

The support we’ve had from family and friends has been amazing! However, what made this challenge most worthwhile was the money raised to help protect Red Pandas like Ember and Sundara, in the wild. By the end of our trip, our fundraising total was close to £1500 (accounting for gift aid) – much, much more than we ever thought we would raise!

Now we just can’t wait to see what The Red Panda Network is going to do with it!