Many photographers take great pains to compose the perfect photo. But few, perhaps, go to the lengths Red Panda Network board member Axel Gebauer took to photograph and film one of the world’s most elusive animals: the red panda.

Breathtaking shots of lush forests, unspoiled rivers and the Himalayan skyline belie the hard work that went into creating them.

Gebauer and crew endured steep climbs through heavy bamboo brush, bumpy rides in overheating Jeeps, leeches during rainy season and fleas in the spring to capture the famously cute arboreal mammal in its natural habitat.

The result is the documentary film “The Forgotten Panda,” which premiered on German television in 2017. A shorter version of the project is being used in zoos for educational purposes.

Between August 2015 and December 2016, Gebauer – sometimes alone and sometimes with a small team – spent four weeks on four separate occasions filming in Nepal and four weeks filming in India and Bhutan with breaks in between.

“From my own experience I can say that the Red Panda is probably one of the most difficult mammal species to film,” Gebauer wrote in an email interview. “That’s because of its not very ‘film-friendly’ habitat – the dense bamboo forests of the Himalayas on extremely steep slopes. But they are also very shy and hides almost always high up in the trees and is extremely difficult to find.”

Getting to the timid animal required that the crew lug cameras, tripods and food up sharp inclines in altitudes between 2,500 and 4,000 meters above sea level. The weather was rainy, cloudy and misty nearly every day, particularly during monsoon season. Filming lasted several hours on some days. 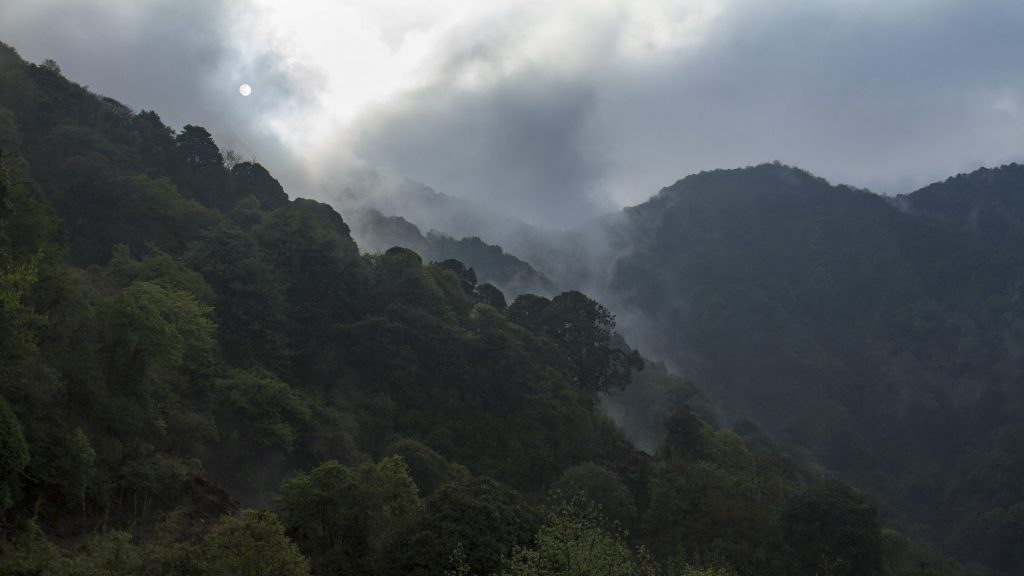 In addition to the unwelcoming terrain and weather, the red panda’s very nature made filming a challenge. The red panda is lazy – a trait necessary to conserve its energy but problematic for filming. “His main diet is based on bamboo and not very substantial,” Gebauer wrote. “Therefore he sleeps through 80 percent of the day.”

As if these difficulties weren’t enough, one of the main obstacles Gebauer had to overcome arose long before filming even began: It took 1½ years to get permission to film in India.

Despite these travails, Gebauer has many fond memories of his travels, including the hospitality of the villagers he encountered throughout red panda country. Locals welcomed the team into their homes, offering them steaming plates of rice and vegetables, and Tongba, a millet-based beer. Others served as red panda trackers and guides.

“Only thanks to the knowledgeable and committed local people we were able to make the film,” Gebauer wrote. “Without the staff of Red Panda Network-Nepal, we would have never been able to see the animals that good.” 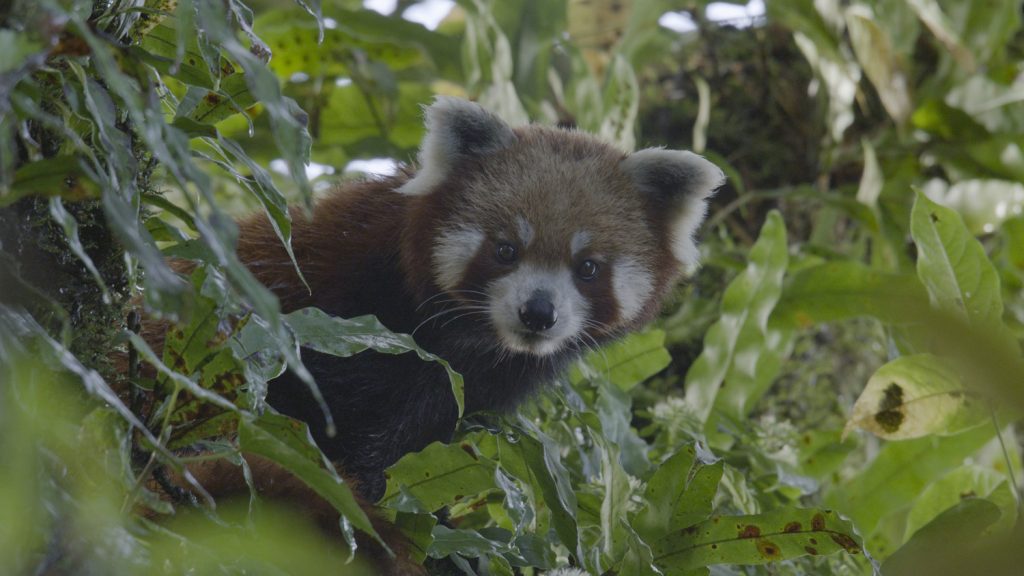 Filming had its surprises, too. “…you may have very exciting encounters with the red pandas if you are waiting peaceful and alone,” Gebauer wrote. “Once an adult animal came very close to me (5 m or so) without any signs of fear — an unforgettable experience.”

Another surprise was the reaction of two red panda cubs to the loud sound of Assam Macaques running through the bamboo forest. The cubsGebauer wrote, were terrified and began to shiver. Viewers may get to see the scene in the 50-minute television version of the documentary.

Gebauer hopes his film will serve as a call to action for the conservation of red panda habitat as well as elicit more empathy from the public for “the cutest mammal on earth.”

“The Forgotten Panda” is a culmination of Gebauer’s work both as a scientist and as a filmmaker. He first became interested in the red panda while director of the Nature Conservation Animal Park-Görlitz in Sachsen, Germany, from 1986 to 2010.

In August 1997, the zoo opened the largest red panda enclosure in Europe. “… we have there in the garden a more-than-100-year-old rhododendron area which is looking like a forest in the Himalayas (I knew this from my 10 expeditions to China),” Gebauer wrote. “That’s why we thought that it would fit very well if we would build there an enclosure for red pandas. …

“Red pandas were special for me because of their secret and unstudied life. I am a scientist and wanted also (to) know more about this species.” 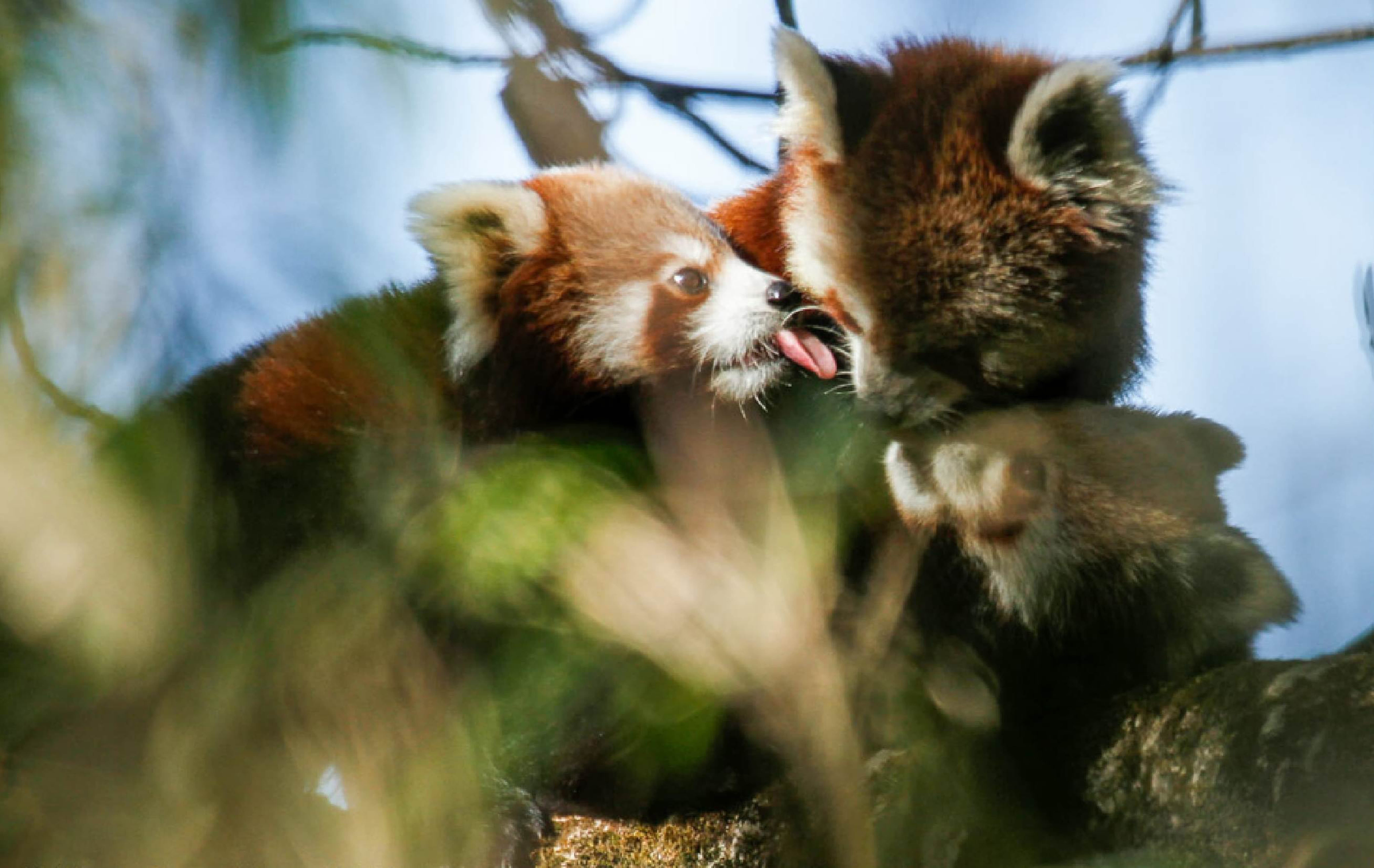 Gebauer’s interest in the visual arts goes back even further. He took up photography while a student of biology at Humboldt University of Berlin in 1975. Later, while taking several tours to Russia with a friend who is a filmmaker, Gebauer began to learn a lot about wildlife filmmaking. Self-taught, he’s worked as a freelance wildlife photographer and filmmaker since 2011.

According to Gebauer, becoming a good wildlife photographer requires a deep understanding for the animals and their habitats, good technical knowledge and being a good team player and organizer, among other things. But persistence is key: “You have to be a lazy and patient guy for waiting days or weeks to get the right shot.”

Although Gebauer enjoys visiting “his” zoo and has a good relationship with the current director, he has no regrets about leaving the bureaucracy of zoo work behind. “Now I am much closer to the animals and their behaviour.”

Check out the 15 minute version of “The Forgotten Panda” here!