Why are red pandas endangered? Like so many threatened animals around the world, a red panda’s life in the wild is perilous. The red panda faces a long list of threats, with habitat loss and habitat fragmentation at the top of the list. In eastern Nepal, in the cold Himalayas, humans cut trees down for firewood and fodder, and clear forests for commercial logging, livestock grazing, and farming purposes. Two little girls from Sacramento, California have displayed this process beautifully in a diorama they constructed as part of a homework assignment in their martial arts class.

Juliette Allayaud and Clementine Ruch are eight years old, and both are Little Dragons at Zen Martial Arts in Sacramento. In order to advance to the rank of first degree black belt, Little Dragons must take on service projects, and these young ladies chose to serve red pandas.

The challenge was: how exactly would these Little Dragons help red pandas? Clementine’s mother, Janet Ruch, knew the Sacramento Zoo would be a great place to start. She helped the girls compose an email to Mike Owyang, Education Specialist and a Zoo Keeper at Sacramento Zoo. The girls were thrilled when Mike invited them to come see the red pandas and talk with him about how to support a species whose natural habitat occurs roughly 8,000 miles away.

During their meeting at the zoo, Juliette and Clementine (accompanied by Janet and Juliette’s mother Jen Beckman) informed Mike that they would like to host a bake sale, with proceeds going toward red panda conservation. Mike responded with three helpful tips: 1) they should hold their bake sale just outside the front entrance to the zoo; 2) the funds raised should go to Red Panda Network; and 3) International Red Panda Day (IRPD) was soon approaching and they should have their bake sale then! 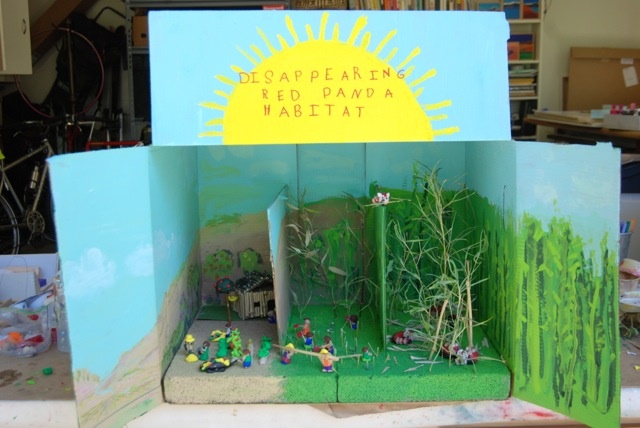 Inspired by their conversation with Mike, as well as the upcoming International Red Panda Day, Juliette and Clementine decided to build a diorama that would depict the habitat loss experienced by red pandas! The box on the far right shows a healthy forest, free from human encroachment. The middle box demonstrates trees being cut down, and the box on the far left shows what the forest was converted to: a human community.

Juliette and Clementine were able to raise nearly $200 for Red Panda Network and helped bring awareness to people entering and exiting the zoo about the biggest threat faced by red pandas. “They wanted to portray the conflict between the needs of local people and red pandas,” says Jen Beckman about the diorama.

If you have a red panda fundraising story that you would like to share please email us. If this story has inspired you to start your own holiday fundraiser for red pandas, please check out our easy-to-use crowdfunding site!