The trees raised in these community-managed nurseries have a significant role in the improvement of Himalayan habitat as well as human livelihoods.

There really is no place like home. For a red panda in Nepal, home is the mountain forests of the Eastern Himalayas. Home is a global biodiversity hotspot for rare and unique wildlife that includes clouded leopard, common leopard, Himalayan black bear, pangolin, Assam macaque, more than 120 bird species, and even Bengal tiger.

Unfortunately, the red panda’s home has been devastated by deforestation.

Red panda habitat in Nepal has been fragmented into 400 forest patches. These small “habitat islands” are isolated and mostly unprotected, often located outside of protected networks as national forests or private land. This makes forest resources and wildlife in core habitat vulnerable to exploitation by local, forest-dependent communities, increasing risk of mortality, population decline, and even extirpation of red pandas from the local area (as highlighted by a recent study).

Plant A Red Panda Home is our answer to an urgent situation in Nepal where deforestation continues to threaten the future of red pandas. It is a national campaign that begins by identifying degraded and fragmented red panda habitat, as well as population bottlenecks. A population bottleneck, or genetic bottleneck, is a sharp reduction in the size of a population due to environmental events or human activities. 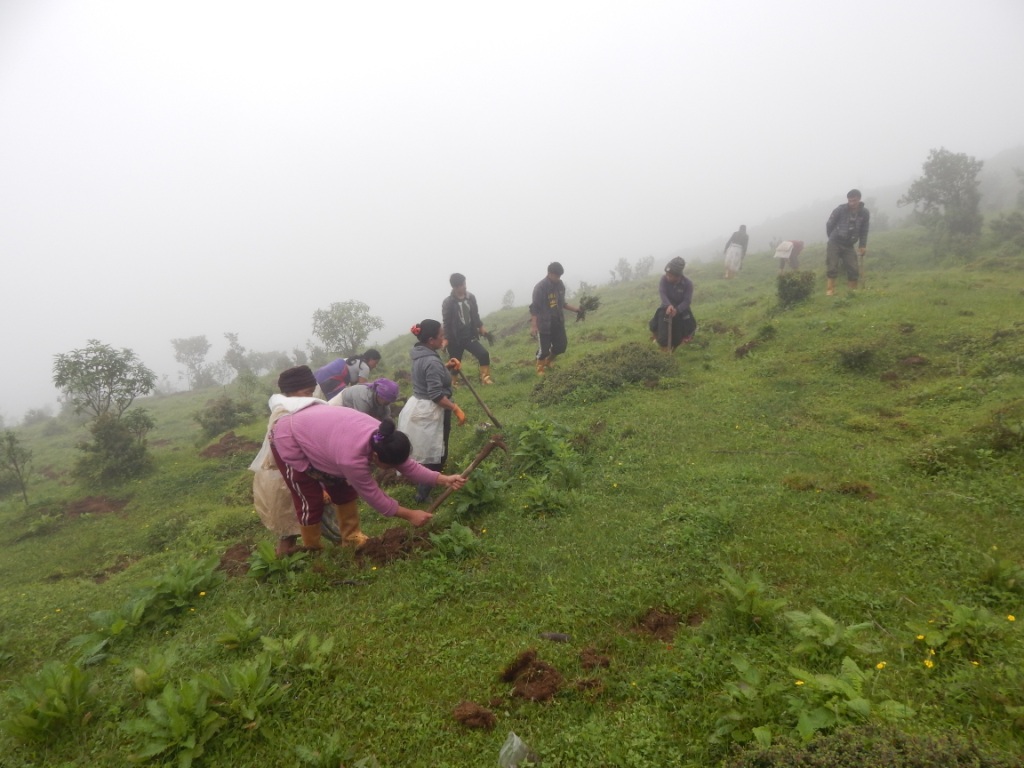 This campaign supports the UN Decade on Ecosystem Restoration 2021–2030 goal of preventing, halting, and reversing the degradation of the global ecosystem.

Thanks to incredible donors like you, we have planted over 134,000 trees in 2021, exceeding the initial goal of planting 100,000 saplings. Many of these trees were red panda food and shelter species for habitat restoration, and the rest were non-timber forest products (NTFPs), medicinal plants, and livestock fodder species to support sustainable livelihoods among local communities.

You must be wondering where all these tree saplings come from? Saplings are raised in special community-managed nurseries that we call "Forest Conservation Nurseries”. 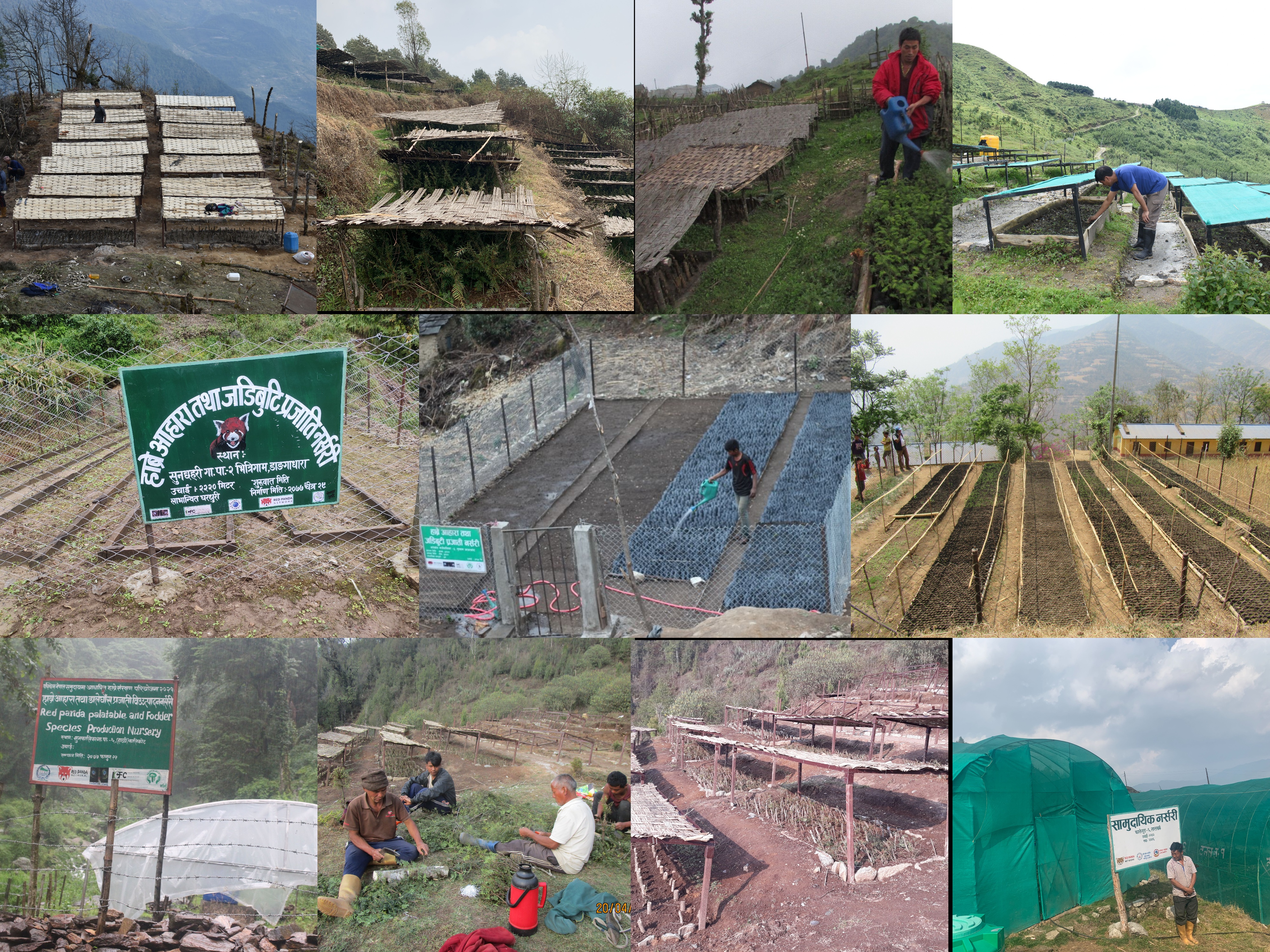 Collage of all 11 Forest Conservation Nurseries in Nepal.

Ramesh continues: “In response, RPN has helped establish many Forest Conservation Nurseries that are located near restoration sites in the project area. This not only reduces transportation cost but also keeps plants viable and genetically native while enhancing sapling survival rate.”

There are currently 11 active Forest Conservation Nurseries in RPN’s project areas in Nepal, seven in the east and four in the west. They supply native tree saplings for our Plant A Red Panda Home campaign as well as provide sustainable sources of NTFPs, medicinal and aromatic plants and fodder species for local communities.

The local community is involved in every phase, from construction and establishing the Forest Conservation Nursery, to selection of nursery plants, to management and operation. Throughout the entire process, the livelihoods of community members are improved through capacity- and skill-building training as well as alternative revenue opportunities for nursery caretakers or “nursery guardians”. RPN recently organized a three-day nursery management training in Panchthar where 13 potential nursery guardians from Panchthar, Ilam, and Taplejung districts were educated and trained on nursery establishment, management, sapling propagation, and cultivation techniques—all-important for producing viable stocks of native plants. The training was facilitated by officials from Panchthar’s Division Forest Office.

To meet our habitat restoration goals, we are ramping up tree sapling production. In 2021, we added four new Forest Conservation Nurseries (2 in Taplejung, 1 in Ilam and 1 in Rolpa) that collectively have a production capacity of over 80,000 saplings. We also continue to support the seven nurseries that we helped previously establish.

Some saplings will go to the Jaubari area, which has been identified as an important location for red panda habitat restoration in Nepal. It is part of the Chitre-Jaubari-Gairibas belt: a critical transboundary location, connecting red panda habitats in India and Nepal. Jaubari has been heavily affected by deforestation and much of the land is now barren.

The Jaubari Restoration Nursery produces over 30,000 saplings that have been used to restore about 76 hectares of red panda habitat in and around the Jaubari area (we also purchased and acquired 31 additional hectares). To meet water requirements, a pond was constructed inside a fenced restoration site, within 100 meters of the nursery. 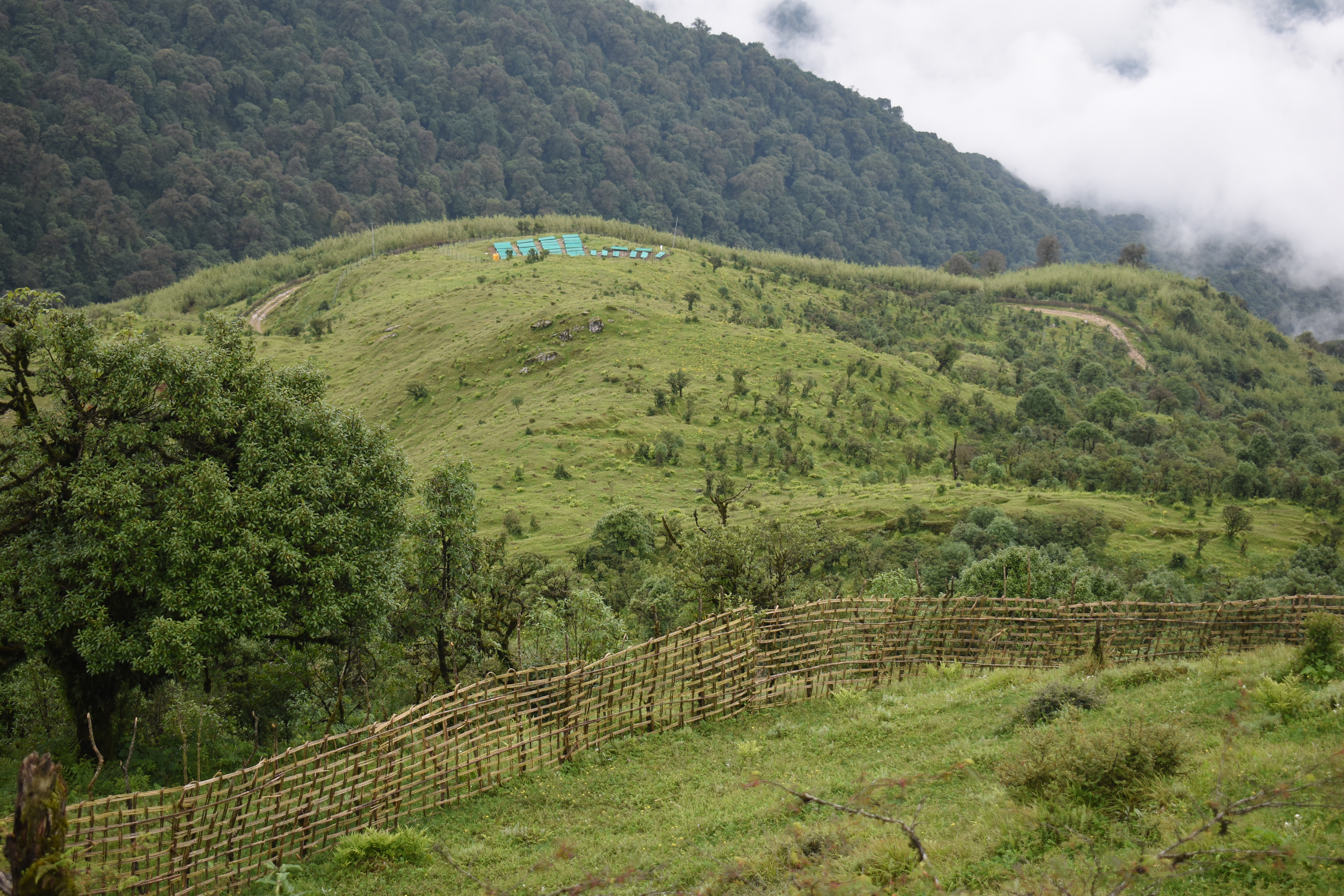 “Restoring red panda habitat is not easy. It takes time and patience but we are determined to do whatever it takes to revive these degraded forests,” Dhan Bahadur Khamdak enthusiastically remarked during an interview with RPN staff. Dhan is the Program Coordinator of RPN’s local implementing partner organization in Ilam district.

“The Jaubari area used to be barren land with extensive livestock ranching issues. I've witnessed a transformation to increased forest cover and improved red panda habitat quality,” continues Dhan who vividly remembers the scenario eight to ten years back: “In order to plant trees, we had to supply saplings from distant villages which was not only labor and time-intensive but also did not provide an adequate supply. Now that we have a nursery inside the restoration site, I am hopeful we can achieve our conservation and restoration goals.”

RPN's decade of restoring Jaubari is yielding results that are encouraging—wildlife is returning to the area. The story of this exciting discovery is told in Red Pandas Return To Jaubari - Part 1 and Part 2.

Watch episode 2 of the Habre Guff-Gaff film series on our reforestation campaign in Nepal!

“The nurseries have diversified our economic opportunities, creating better and more sustainable lives for ourselves and our families,” said Bhakti Hang Limbu, a nursery guardian at Bhalu Gaunde Nursery located in Taplejung. “With the knowledge, experience and skills I’ve accumulated over the years, I now also work as a nursery technician who trains others in preparing nursery beds and growing saplings. My income stream is now stronger and more stable than ever,” Limbu continues his testimony with a big smile.

We currently have 11 nursery guardians looking after 11 Forest Conservation Nurseries in our project areas in Nepal. Nursery guardians are local people we hire and pay to manage nurseries which includes seed collection and treatment, sapling transplantation to poly bags, watering, fertilizing, and weeding. 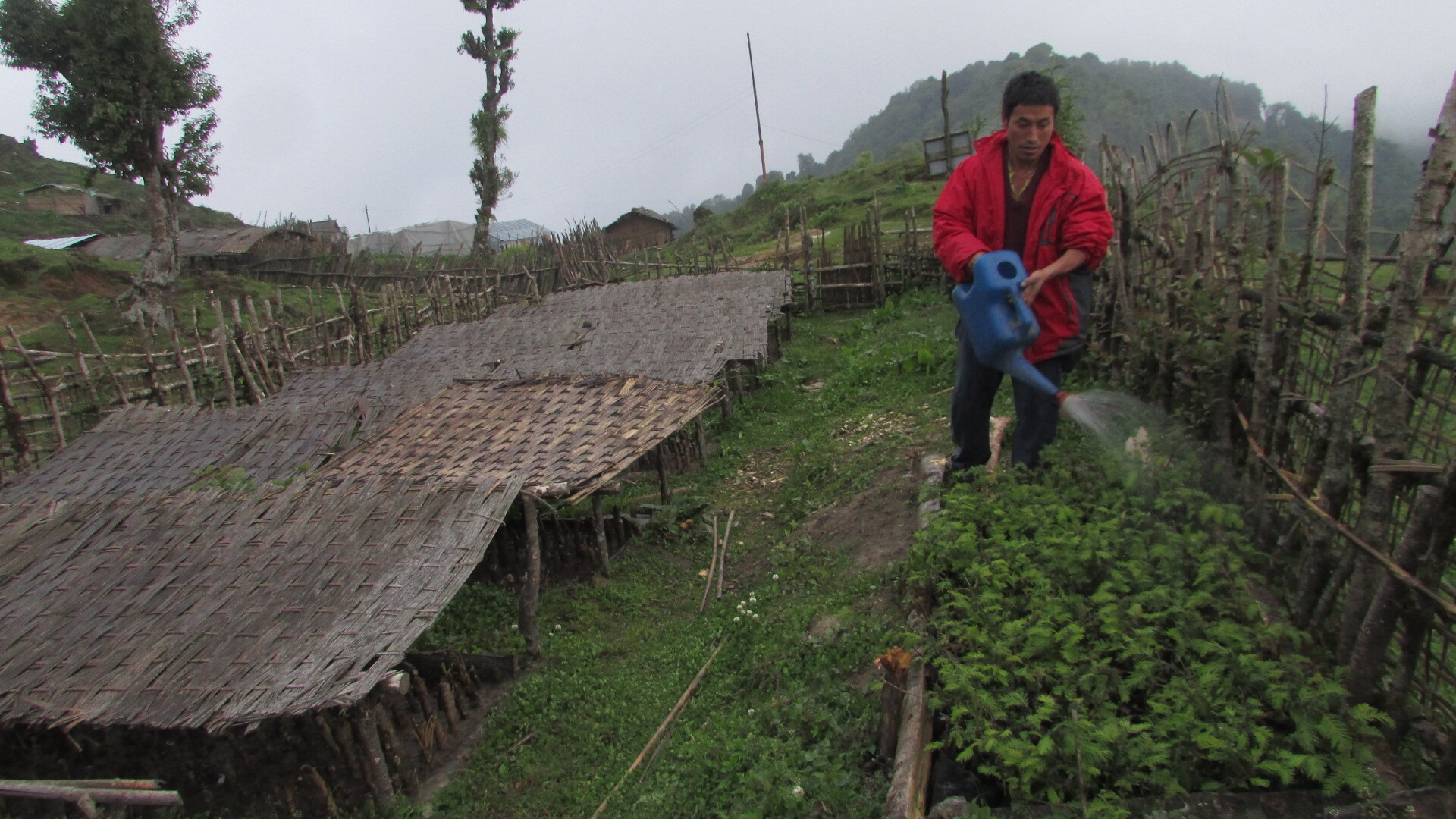 Seventy-three thousand saplings of Taxus Wallichiana, an NTFP, were distributed to 16 Community Forest User Groups (CFUGs), 39 local farmers and 11 Forest Guardians in Panchthar and Ilam districts. Local people were also provided with 9,250 fruit tree saplings in western Nepal’s Kalikot and Rolpa districts. Many of these saplings were raised in RPN Forest Conservation Nurseries. This not only supports sustainable income but also conserves habitat from fragmentation and degradation by reducing human dependence on forest resources. 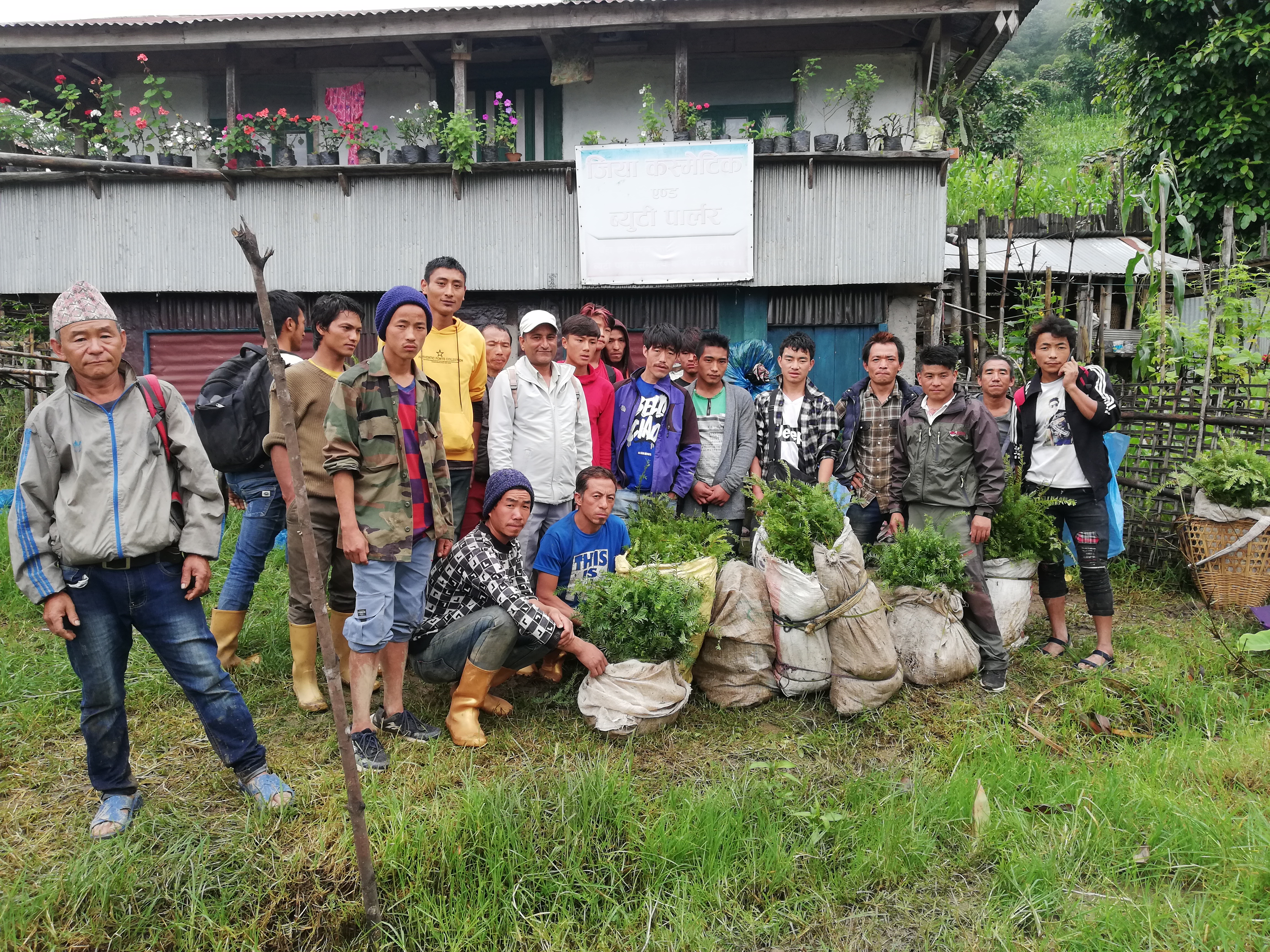 The Harkate area of Taplejung district is prime red panda habitat as well as rangeland for local livestock who graze freely in the forests and compete with red pandas for food and space. To address this concern, RPN collaborated with Sunpati Community Forest and Harkate Livestock Herder Group to construct Harkate Nursery. We employed local people for 90 days to complete this project which resulted in a community-managed nursery that has the capacity to produce around 20,000 saplings of red panda food and shelter species for reforestation purposes and fodder species to reduce competition between livestock and red pandas and mitigate habitat degradation (livestock don’t need to forage in red panda habitat).

Local people hired to construct Harkate nursery after its completion.

“It gives me immense pleasure to witness the trees supplied from Forest Conservation Nurseries thriving in the restoration sites while also contributing to sustainable revenue among local communities,” Khamdak continues.