As a highly specialized species, red pandas have many unique traits that set them apart but they are also very important to global biodiversity. They have been identified as a flagship species and an indicator of ecological health of the Eastern Himalayan Broadleaf Forest Ecoregion — one of our planet's biodiversity hotspots — that supports over 500 million people! Their conservation has landscape-level impacts, and like an umbrella, the entire ecoregion (its forests and wildlife) are protected when red pandas are conserved. Here are fifteen of our other favorite red panda facts!

1. Red Pandas Are The First Panda

In 1825, nearly 50 years before the giant panda was discovered, Frédéric Cuvier first described the red panda as the most beautiful animal he had ever seen. Georges-Frédéric Cuvier was a French zoologist and paleontologist who was the head keeper of the menagerie at the Muséum d'Histoire Naturelle in Paris from 1804 to 1838 (the year he died). He was the younger brother of the "founding father of paleontology", Jean Léopold Nicolas Frédéric. Georges-Frédéric's work was also widely known and was mentioned in Charles Darwin's On the Origin of Species and in Herman Melville's Moby-Dick! Georges-Frédéric actually first described the western red panda (Ailurus fulgens fulgens). In 1897, F. W. Styan discovered another red panda subspecies and named it Ailurus fulgens styani, now refulgens. Now you can see why red pandas are the first panda — the original panda.

2. They Are Not Related to Giant Pandas

The red panda's name might lead you to think that its closest relative is the giant panda, but studies show that they are most closely related to raccoons! Recent genetic research also associates them with the family Mustelidae, which includes weasels, otters, and wolverines. 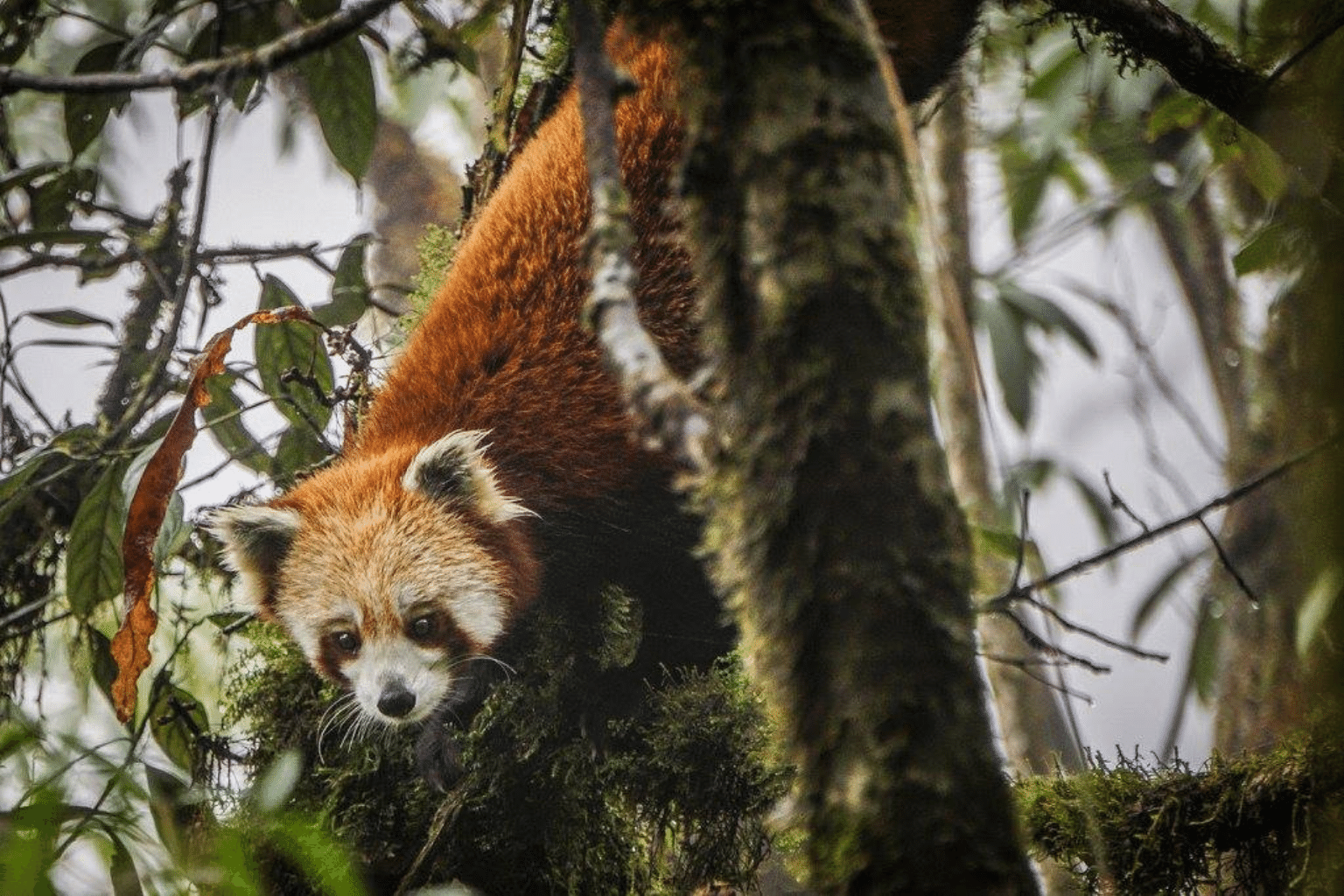 ​Red pandas have to eat 20 to 30 percent of their body weight in bamboo — can eat up to 20,000 leaves! — each day. Bamboo doesn't offer much nutrition and they can only digest about 24 percent of it. So why do red pandas eat it? Well, bamboo can grow rapidly and abundantly in the cloud forests where red pandas live. And because it is such a low-calorie option, there isn't much competition for bamboo among local wildlife, so it can be a plentiful food source! While bamboo makes up most of a red panda's diet, they will also occasionally eat eggs, insects, flowers, birds and small mammals when available.

4. They Have Many Names

Other than the first panda and original panda, red pandas are known by many names including firefox, red bear-cat, red cat-bear, and the lesser panda.

One of their nicknames is "red bear-cat" though many of the similarities have to do with the mama-panda-baby-panda relationship. Their babies are called cubs (like bears) which are typically born in June through September in the wild and mainly stay in their dens for the first three months. Cubs use high-pitched whistles to get their mom’s attention when they are hungry. Red panda mothers will build a birthing den in a hollow tree or a tree stump and line it with leaves, grass, moss, and tree branches to nest their young. Like a cat, red panda moms use their tongues to keep their babies clean, and to keep them safe, she will carry her cubs in her mouth, by the neck (again, like cats and other carnivores), and while they curl into a ball to help with transport. 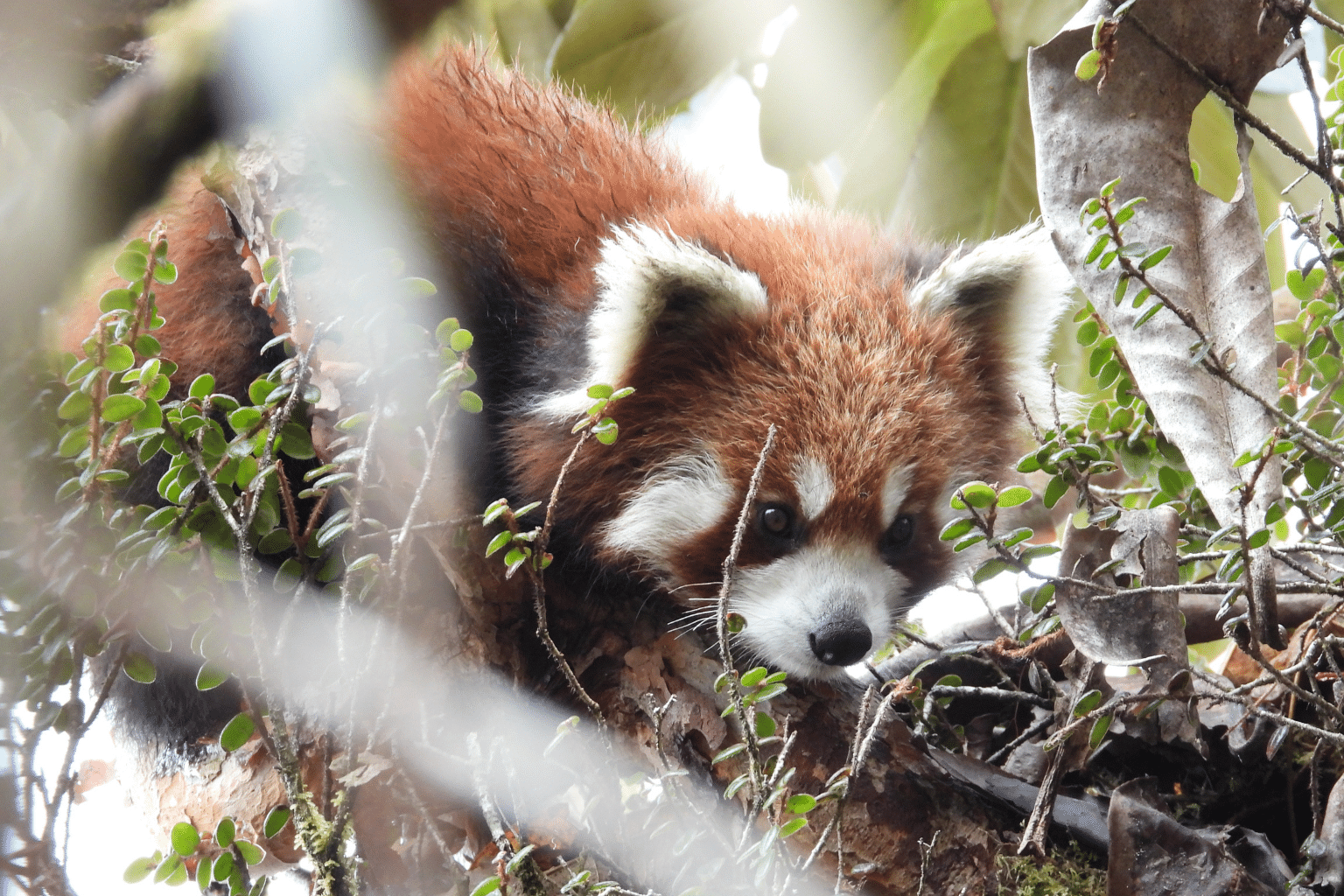 6. They Are A Carnivore.

Red pandas are classified as carnivores because they're descended from the same ancestors as other carnivores but their diet consists mainly of bamboo. They evolved from Simocyon batalleri or the “short-snouted dog"! This carnivorous, tree-dwelling relative of the red panda was about the size of a mountain lion and lived in the late Miocene and early Pliocene era. Fossils of the Simocyon have been found in Europe, Asia, and North America.

7. Red Panda's Have Six Digits on their Front Paws

Red pandas have a pseudo-thumb: an enlarged, modified wrist bone they use for climbing trees and grabbing bamboo stems and tree branches. Giant pandas have pseudo-thumbs as well but for different reasons. This is an example of "convergent evolution" which is when two unrelated animals faced with similar circumstances evolve to look similar. In this case, the red panda's false thumb evolved to help it climb trees, and only later became adapted for the bamboo diet, while giant pandas evolved this virtually identical feature because of their bamboo diet. 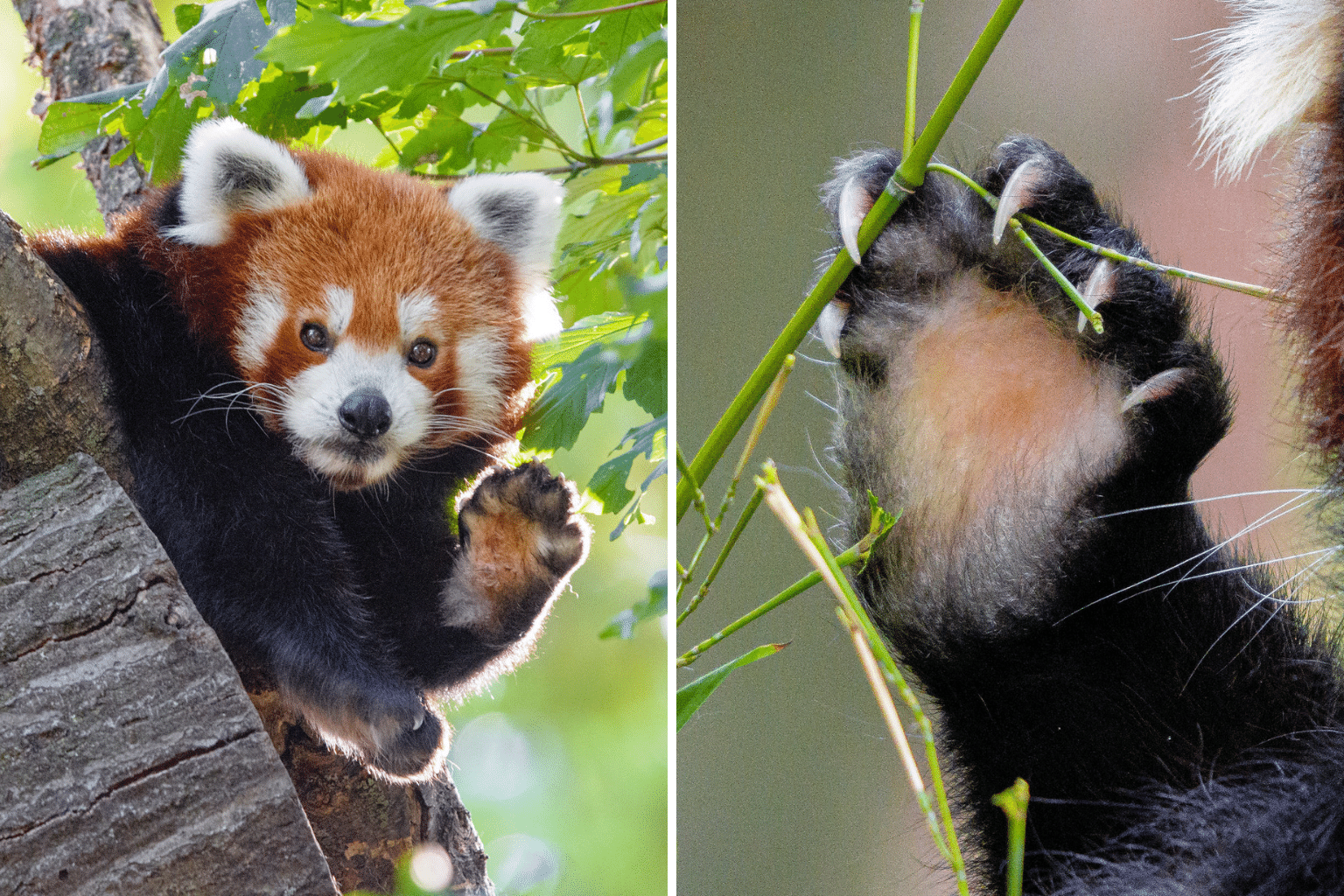 8. They Spend Two-thirds of the Day Sleeping

Red pandas will sleep for up to 17 hours a day! They have been identified as both nocturnal and crepuscular (active during twilight hours) and prefer to rest on tree branches or in tree hollows.

9. Red Pandas Sleep in their Tail

Yes, it's as cute as it sounds. A red panda's tail can measure from 12 to 20 inches long — that’s almost the length of their body — which provides them with supreme balance while navigating the treetops. They will also use these tails as wraparound blankets in their chilly mountain habitat.

While usually quiet creatures, red pandas make a variety of sounds including tweets, squeals, grunts, hisses, and even a "huff-quack". 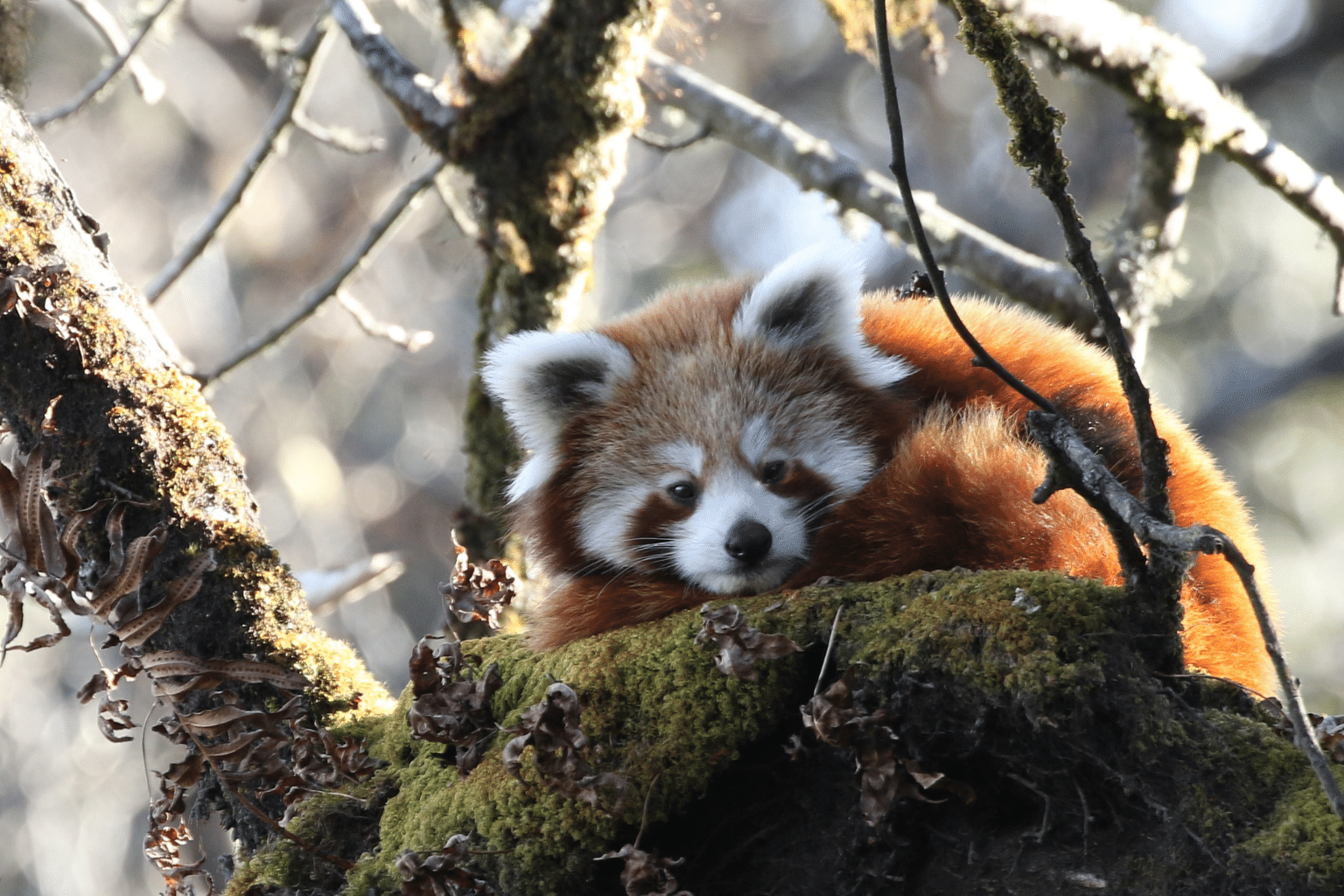 11. The Red Helps Them Camouflage

Red pandas blend in great with the red moss, white lichen, and yellow-orange-red foliage of their forest habitat. And their black bellies make them difficult to see from below!

12. Red Pandas Glow in the Dark

The white on the red panda's face is "almost luminescent" and can guide a mother's lost cubs in the darkness! The reddish 'tear tracks' extending from the red panda’s eyes to the corner of their mouth may help keep the sun out of their eyes. 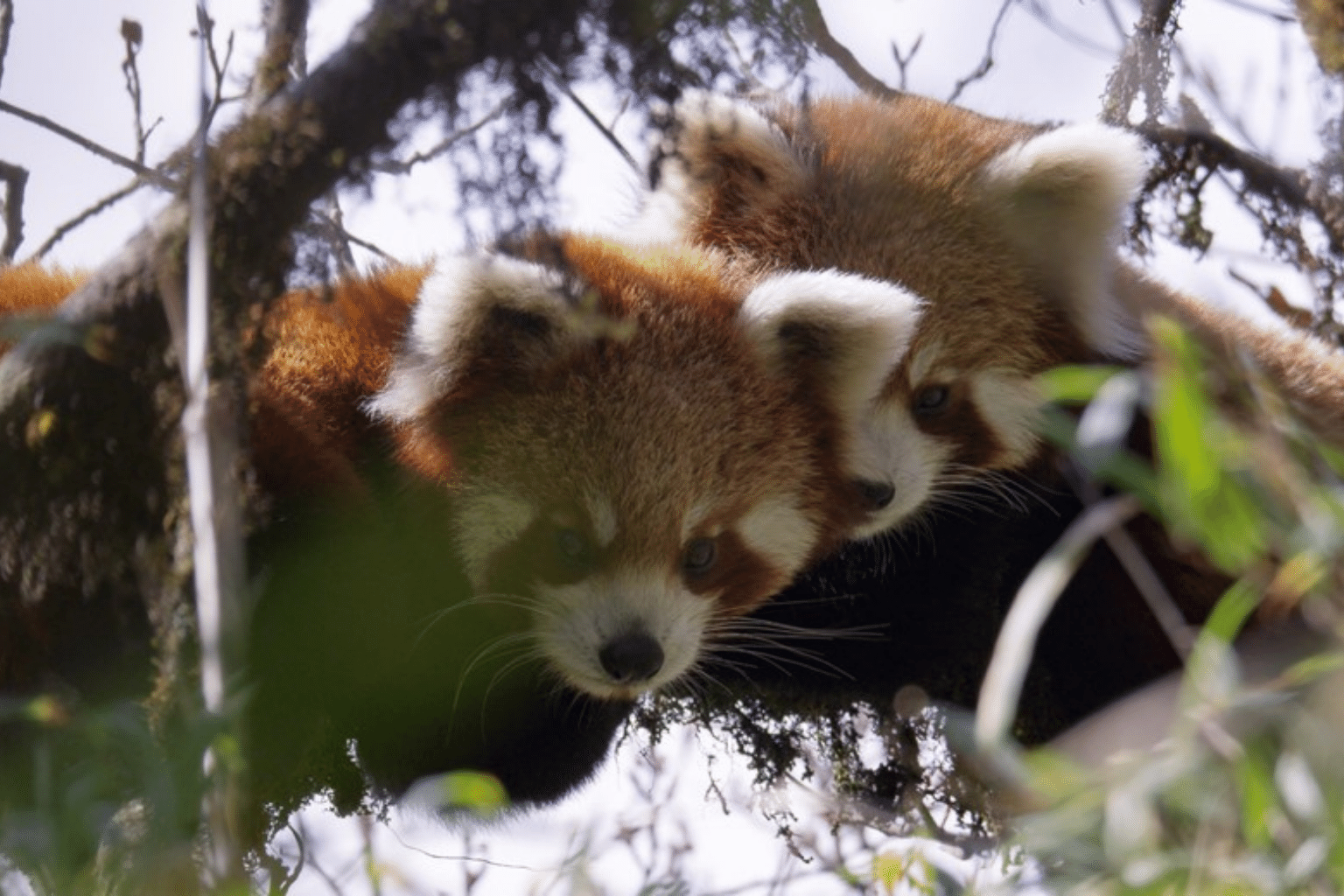 When provoked or threatened, red pandas will stand on their hind legs to appear larger.

When it gets really cold, red pandas wrap their tail around themselves and go into a deep sleep, reducing their metabolic demands and lowering both their core temperature and respiration rate (a process called torpor). A red panda's diet consists mostly of bamboo leaves, which do not provide much nutrition. To compensate for this, red pandas only eat young, tender bamboo leaves and can actually become dormant, briefly lowering their metabolic rate to conserve energy.

Red pandas live in temperate forests at elevations between 4,900 and 13,000 feet and will move lower during the cold, winter months.

Want to join us in celebrating our anniversary while making a powerful impact for red pandas and local people in Nepal? Check out our Fifteen for the First Panda campaign! You can become a Panda Guardian and support sustainable livelihood iniatives that are urgently responding to red panda habitat loss and poaching, as well as gender inequaliy among the communities we work with.

Not interested in becoming a monthly donor at this time? No problem! A one-time donation of $15 (or more) will still make a difference for the first panda.